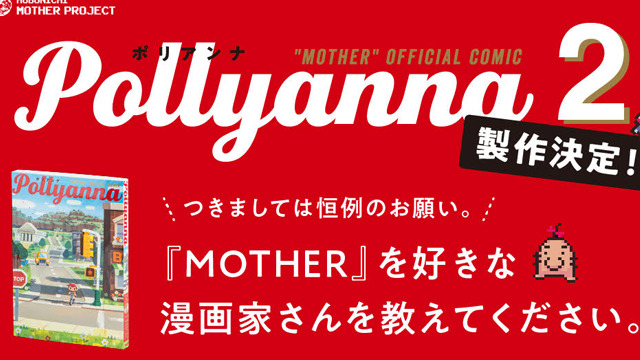 The official Hobonichi Mother Project Twitter account announced that Pollyanna 2 “Mother” Official Comic compilation will enter production. Submissions for comic artists are currently open, with the deadline for submissions ending on March 31, 2021. A price and release date have not been revealed as of yet.

In June 2020, the first Pollyanna “Mother” Official Comic released to Japanese audiences. This comic compilation featured artwork from various Japanese artists. It included a total of thirty-five stories, with each story illustrated and told by a different artist. Each of these stories was based on the Mother series. The Pollyanna 2 “Mother” Official Comic compilation will continue with this tradition and feature another wide variety of artists who will have the opportunity to illustrate a comic centered on the Mother series.

The Hobonichi Mother Project released a series of Mother themed merchandise throughout 2020. This has included various types of accessories such as necklaces, keychains, and pins. Mr. Saturn plushes were part of this lineup of goods as well. Additionally, for a limited time consumers could get their hands on special sukajan jackets featuring the Mother 2 logo. Originally, only members of the development team received these jackets.

The Mother Music Revisited album was made available to stream through Spotify in January 2021. This album features various re-arrangements by Mother series composer Keiichi Suzuki.