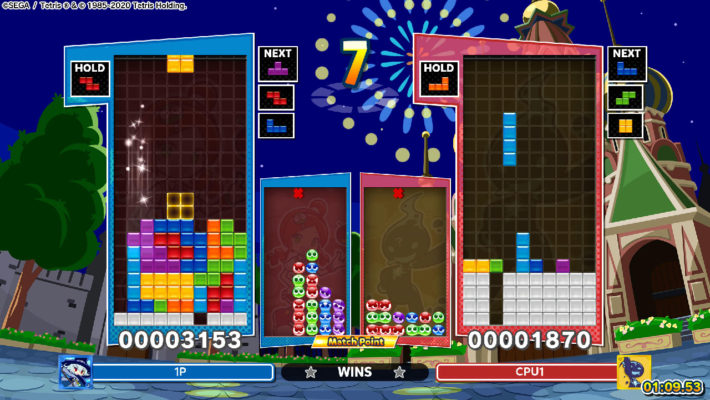 Puyo Puyo Tetris was a wonderful surprise. Combining the global favorite puzzle game, Tetris, with what was at the time a hibernating series in the West, Puyo Puyo, brought fun mash-ups to lots of players who weren’t prepared for what that would mean.

Puyo Puyo Tetris 2, by its very nature, can’t be that. We know what these games look like when pitted against each other! So the challenge of a sequel is pushing the concept forward. How does Puyo Puyo Tetris 2 do that, exactly?

If you’re a newcomer to the franchise, don’t worry about catching up! Puyo Puyo Tetris 2 contains all the modes of the original, largely untouched. Did these games change? The game’s producer, Mizuki Hosoyamada, said the team listened to fan feedback.

“We have received lots of feedback for our most recent titles, including Puyo Puyo Tetris and Puyo Puyo Champions, which were released worldwide,” Hosoyamada said. “We are grateful for the enthusiasm of the dedicated fans of both Puyo Puyo and Tetris. Sega’s representatives have been asked to report back to the development team and IP supervisors on what data they have compiled for each region, and we are developing the game with that knowledge in mind.”

In our time with the game, we honestly haven’t found much in the way of significant adjustments. If you saw Puyo Puyo Tetris and Puyo Puyo Tetris 2 side-by-side, you’d have trouble distinguishing between the two. This is probably a comfort to people who like the game and just want it on their new platforms. If you’re looking for huge upgrades or a new coat of paint to justify a new purchase, though? That’s not something the game is really interested in offering. Its changes are minor and under the hood.

That isn’t to say there’s nothing new, though! It’s just not in the big main play modes you know. The new game type, Skill Battles, brings progression, customization and unlockables to an otherwise-static Puyo Puyo Tetris 2 experience. Hosoyamada told us the team might have bit off a bit more than it could initially chew with this mode. 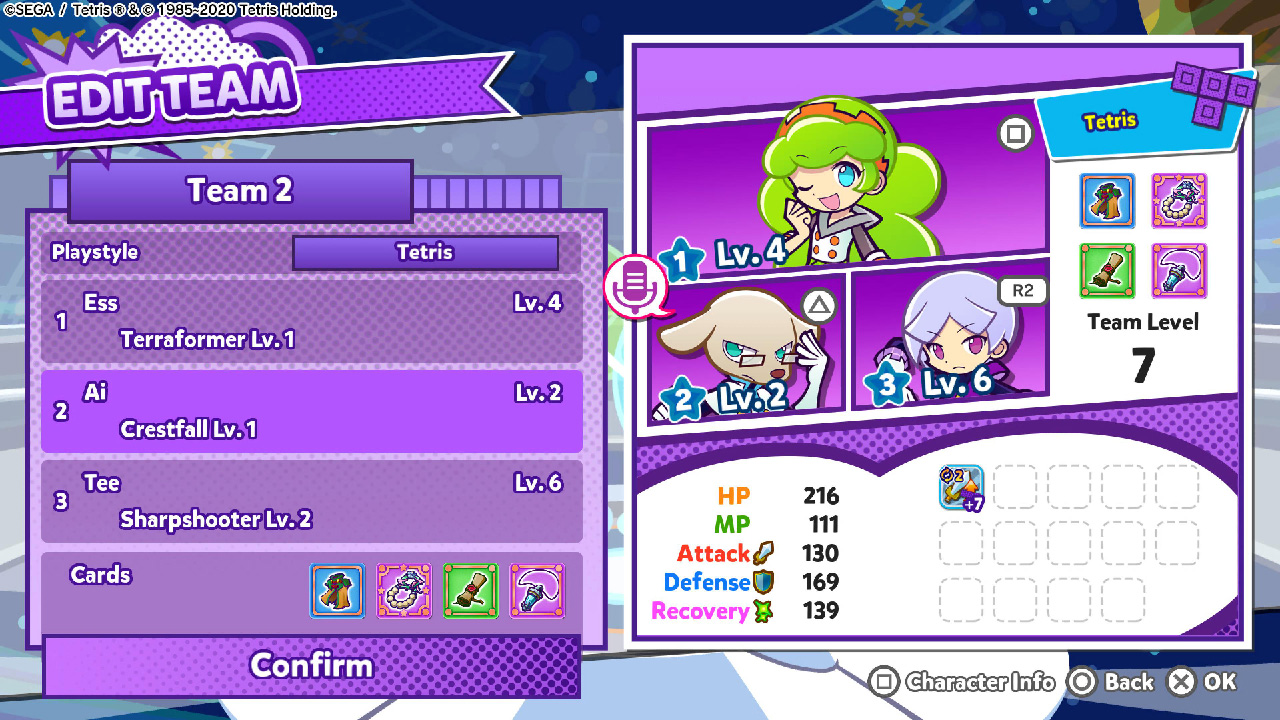 “There were so many more things to consider than we previously imagined, such as an easy to grasp UI for the new ruleset, various skill combinations, balancing so that newcomers and veterans could play together, and various other game balancing,” Hosoyamada said. “In fact, we were tweaking the balancing until the very end.”

The new Puyo Puyo Tetris 2 Skill Battles mode tries to keep players from being overwhelmed. It starts players at low levels with very simple starter skills, like healing or simple board clearing. This helps in some respects. Still, prepare yourself for these early battles to be over before you know it. Since all your characters start at a low level, that means you don’t have to take much damage to get knocked out. In most of our early sessions, we were lucky to use a skill at all before one player threw a combo attack at the other and knocked them out. There are some interesting pieces here, and we look forward to sharing our full thoughts about Skill Battles in our review in a few weeks! But the mode takes some time to ramp up.

“It’d be really great if you could check it out and play time attack and score attack to see how you compare to other players,” Hosoyamada said. “I’d also recommend watching other players’ videos to study up on tips and strategies.” 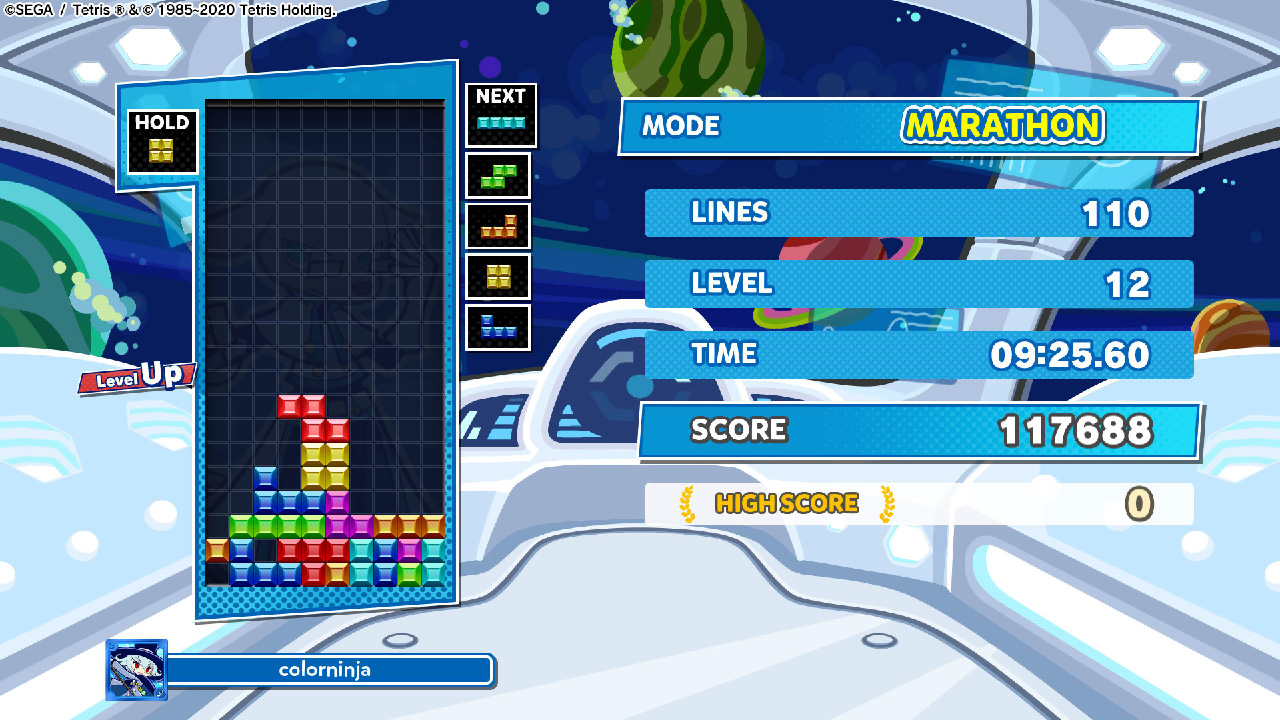 Of course, there’s not a lot of action yet on the pre-release leaderboards. (Not that we’re complaining! It’s sort of fun to be first. Even if it’s just for a bit.) Still, these do go a long way to making Puyo Puyo Tetris 2 a good Puyo Puyo game and a good Tetris game! That’s a welcome development for those who want the traditional styles included in the same package as the special crossover mixes.

The story mode, Adventure, may not serve as a huge draw for a game known for its multiplayer. It has educational value, though! It helps ease players toward learning new skills in many ways. The development team balanced heavily toward letting you get through with one star without too much effort. Achieving higher ratings, on the other hand, takes some doing. A warning, though: while these goals usually involve playing the game at a higher level, some are about achieving higher scores before defeating the opponent. This means you occasionally need to play slower and use less impressive combo attacks to keep the game going long enough to get that point counter up.

Puyo Puyo Tetris 2 releases December 8, 2020 on PlayStation 4, Nintendo Switch, Xbox Series and Xbox One, with a “holiday” release on PlayStation 5 and a PC launch sometime after. Stay tuned for our full interview with the game’s producer, Mizuki Hosoyamada, later this week!