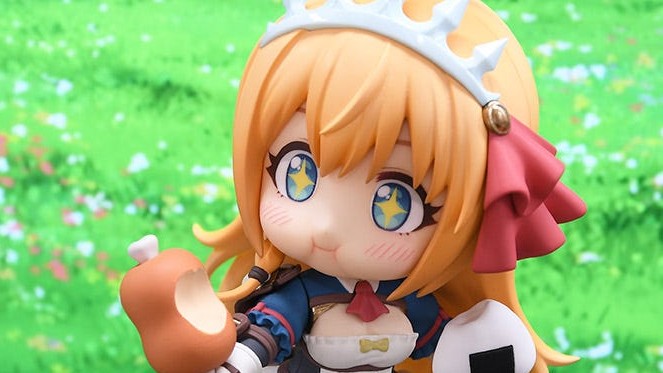 Good Smile Company teased the debut of its next Princess Connect Re: Dive Nendoroid, a figure of heroine Pecorine, in its Kahotan Blog. Pre-orders for her will open on July 20, 2021, ahead of her 2022 debut. The tease also included an accounting of all the items that will come with the figure.

Pecorine is known for her healthy appetite in Princess Connect Re: Dive, and the Nendoroid will pay tribute to that. She will come with two pieces of food to “eat,” which are an onigiri with a bite taken out of it and a chunk of meat on the bone (with another bite out of it). One of her face plates will also be of her eating. The other two face plates have her smiling and winking. She will also come with her sword

This will be Good Smile Company’s third Princess Connect Re: Dive Nendoroid. The first character to get a figure was Karyl. That launched in 2021 in Japan and North America. The second one is Kokkoro. That character’s Nendoroid will appear in Japan in January 2022, with the US version following a month or two after.