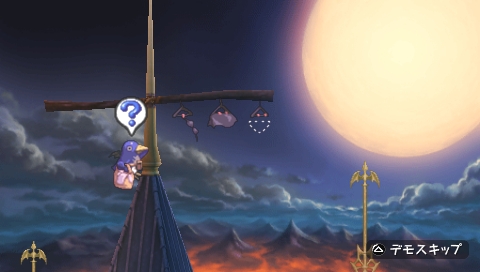 I can’t help but start with the two observations I made after I had played my first hour of Prinny 2: Dawn of the Great Pantsu War.

After playing through the first half of the game, I have decided: this game is the epitome of “love to hate, hate to love” for me.

I hadn’t played Prinny 1 prior to Pantsu War, which is fine story-wise because the two games aren’t connected. However, since they’re both platformers, it’s the gameplay experience that counts. From what I’ve read, the Break system, which is a superpower mode that the Prinny gets when he (it?) racks up combos, is new. A Baby Easy difficulty mode and some additional types of obstacles, like breakable platforms and weather effects, were added to the levels as well. The art has also been given a “facelift,” with the addition of 3D bosses that fit seamlessly with the 2D art style.

The rest is, to put it lightly, entirely Disgaea-esque. The plot is pure crack. The great Etna and her infamous Prinny squad make their return … meaning that Etna wants something done and the Prinnies (zombie penguins that explode when you throw them) better get it done chop-chop. In Prinny 2, Etna’s panties get stolen by the Great Demon Thief and it is your job as the one Prinny with the shiny red scarf to boldly go where no Prinny has gone before. 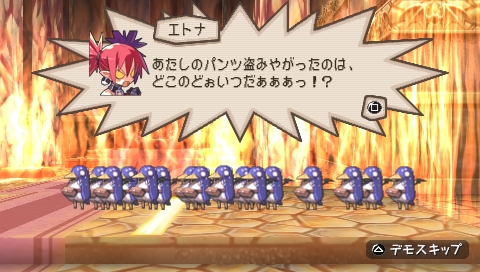 Oh, woe is the poor penguin.

The game is split neatly into 10 levels, each level symbolizing one hour in the game. For the first six stages, the order in which you tackle the maps is up to you. What I found really interesting was that no matter which stage you chose, the first would be the easiest, the second a little harder, and the third harder still. In other words, if you choose to play the Satan Land (the obligatory winter wonderland world) level first, the content in the level will be different, and much easier, than if you play the level last. Not only are there more enemies (what was 3 enemies has multiplied to 15) and more obstacles (there are spike balls there now?!), but the very composition of the stage is different (more bottomless pits, different positioning of platforms, more chances of sudden death).

This being said, I learned early on that it’s much easier doing harder maps early before they turned from just “hard” to “impossible.”

I’ve probably put off a few people reading this review, going on and on about how the game is so hard and I keep on dying, and whatnot. Never fear! There are actually three difficulty levels in this game. There’s the Standard level, which is probably what players should start on to get a feel for the game. Here, Prinnies can get hit twice before they explode.

Then there’s Hell’s Finest, which is super-difficult. I didn’t dare try it, so I’m not sure if there are any changes level-wise, but I do know that you can only get hit once before kablooey.

Finally, Baby Easy is a new difficulty level added to Prinny 2. Here, you can get hit three times, and also, there are blocks that appear throughout the stage that cover up bottomless pits, enlarge platforms, and prevent enemy attacks, generally making the game a breeze. You can also regenerate yourself in Baby Easy mode, regaining “hit points,” which you can’t do in the other two levels. Usually, once you’ve been hit a set number of times, you’re dead. 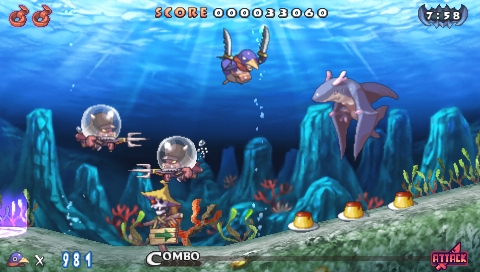 From the start, you’re given 1000 lives. At first, this may seem like a lot, but the lives flow faster than a waterfall, and before you know it, you’ll find yourself down to 900, 800, 700… Amazingly, though, the constant respawning isn’t annoying. It’s quick, clean, and you can forgo a long loading time or animation sequence before attempting to get past the challenges before you. (Conversely, you also die a lot, so it’s only fair, I suppose.)

The controls, too, are crisp and clean. I have never seen another game with such a quick reaction time – for every time I press the square button, the Prinny attacks, no matter how fast I hit the button. I’m used to games having a refractory period, where no matter how many times you press, the action won’t be registered until the previous one’s done. Nope, not the case with Prinny 2, which is why this game is a great harm to my thumb, as my first two observations above pointed out.

Out of the controls, the only problem I had was that the directional pad was read in before the jump button. In other words, you can’t control the character after you’ve jumped, which is very different from most platformers like Super Mario Bros. Newcomers to the series may die a few times before they get used to the jumping scheme -– and you can’t get very far in a level without mastering the art of judging distances. In light of everything in this game, though, this is really a minor issue that you could get used to easily. 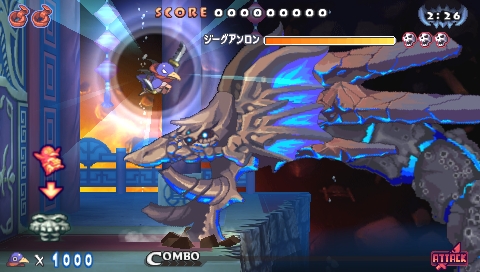 Racking up combos to get a Break is also really fun (unless, of course, you’re standing on a destructible platform…), especially when you encounter the occasional unbreakable Etna dummy that you wail at the gauge is full. When you reach Break, all foes in the vicinity are damaged, and with Break, your attacks are at least twice as strong and enemies go down extremely quickly; not to mention, most of your other actions are changed to attacks.

The Hip Pound can now be used to damage the opponent, and the twirl can also be used as a mild attack. There’s also an extra-damage sliding attack that uses up your entire Break gauge at once – a true all-or-nothing attack. Actually, I think it’s absolutely essential to master using the Break because it’s the only reliable way to damage some of the tougher enemies and the bosses.

For a game with only 10 stages, there is an amazing amount of content in the game. Each level is ingeniously designed to provide a good challenge, and the first six even have six different versions each. Sometimes the boss also changes, depending on when you tackle the level, and for each one of these boss, he has his own “backstory” (as serious a story as you can get for a character in Prinny 2, at least), voice, set of attacks, and animations. Each normal enemy is also fully animated as well as voiced, and the environments you travel through are truly beautiful, both the scenery and the background music.

Honestly, I would stand and gaze in awe at the art if it weren’t for the fact that an enemy cold stab you in the back at any second. Each cutscene is also well-voiced and the dialogue is entertaining, as expected of a game that’s related to Disgaea.

Despite having all this content for one game, Prinny 2 also comes with a side story – Asagi Wars, which is unlocked by collecting all of a certain item throughout the course of the game. I actually needed to restart my game to collect these, so I’ll save this section for another playtest. 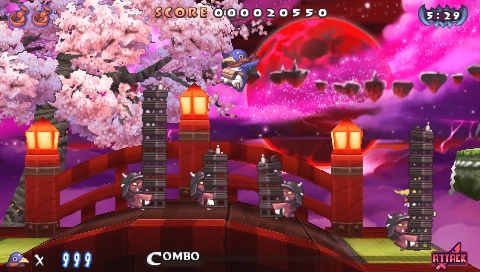 Overall, I found Prinny 2 a very enchanting game that was engaging, hilarious, beautiful, infuriating, and frustrating, all at the same time. If you don’t mind a challenge, I’m sure you’ll enjoy this game. Then again, if you’re a fan of the Disgaea series and have played the other games, that concept shouldn’t be all that new to you by now…