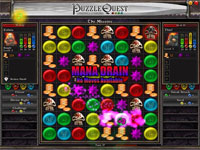 Puzzle Quest: Challenge of the Warlords just arrived on the Xbox 360 with upgraded visuals. It also silently slipped on the PC market as a downloadable game. For $20 you can purchase the 58.94 MB file and it includes some form of multiplayer.

However, it’s hard to beat the price of 1200 Microsoft Points ($15) which includes online play over Xbox Live. I guess if you don’t have an Xbox 360, DS, PSP, Playstation 2 or Wii (that's a lot of ports!) the PC version is probably worth looking at, it is another way to get your hands on a great game.