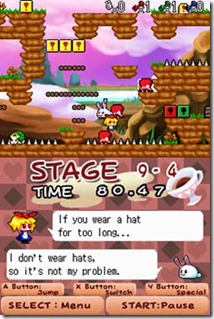 Japanese developer, SilverStar, and publisher Agetec, have a series of downloadable platformers titled Rabi Laby (Rabbit x Labyrinth), where you control Alice and a talking rabbit named Rabi to coordinate and make your way through the games’ stages.

The Rabi Laby games started out on Nintendo DSiWare, and in January, Rabi Laby 3 brought the series to the Nintendo eShop for the 3DS—in Japan, that is.

In North America, the first game was released in early 2011, after which Agetec went quiet on the Rabi Laby front. Since we hadn’t heard from them about the series in an entire year, we assumed we wouldn’t be getting any more of the games.

That changed last week, when Rabi Laby 2 quietly slipped out onto DSiWare in North America. The game costs $2, and it finally turning up probably means we’ll get to see Rabi Laby 3 at some point, too. In fact, Agetec have actually been quite busy on the U.S. DSiWare—just look at all the games they’ve published on the service so far, many of which are from SilverStar as well.