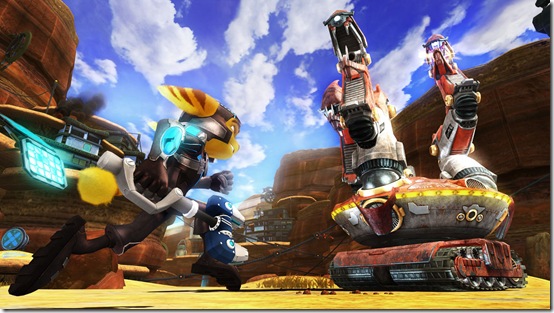 Ratchet and Clank: A Crack In Time brings Ratchet’s robotic sidekick, Clank, back as a playable character. In this game Clank was carrying carrying a golden staff that allows him to activate time pods.

When Clank stands a time pod he can record up to a minute of actions. After Clank is done time rewinds and a holographic Clank carries out the recorded actions. This feature was demonstrated with a puzzle where Clank needs to stand on two switches at the same time to open a door.

Solving this puzzle was easy. First, you record Clank standing on the left button, then rewind time. Then record Clank standing on the right button. While the second recording is going on the first holographic Clank carries out his duties and stands on the first button. Once two Clanks are recorded, the real Clank can run into the door. Players can record up to four Clanks using Time Pods. The puzzle was shown as a sample of how this will be used in the game, but holographic Clanks can also fight. If Clank defeats an enemy during a recording it will respawn when time rewinds and vanish when a holographic Clank attacks it when time moves forward.

Ratchet has some new tricks up his sleeve too. He’s armed with freezing bombs and hover boots to move through levels faster. Neat, but it’s the time bending Clank gameplay that makes Ratchet and Clank: A Crack In Time standout from the other games in the series.

Ratchet and Clank: A Crack In Time is scheduled to come out this fall.