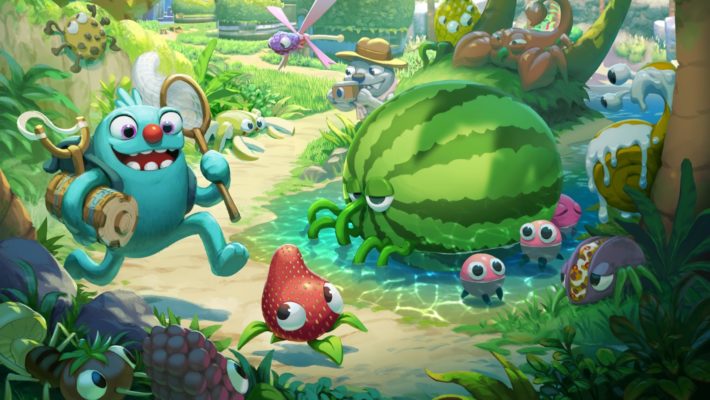 Bugsnax got everyone talkin’ ‘bout Bugsnax. Though, more specifically, people seemed charmed by its theme song. (To be fair, it’s a great tune.) This means the actual experience, an adventure that sends you to a largely untamed island and to catch tasty bug-food hybrids to feed and rebuild a community to solve a missing persons mystery, was overshadowed by a fun Kero Kero Bonito tune. The good news is, the game itself is enjoyable enough, but probably not as great as the song that made it famous.

Bugsnax begins with a disgraced journalist known for reporting on questionable topics, like monsters and lost cities, convincing their GNN editor to allow them to cover the equally questionable Elizabert Megafig’s discovery: Bugsnax. You eventually get the go-ahead and head to Snaktooth Island, but things aren’t as pleasant as they appeared on the tape Lizbert sent you. There are ominous signs, you essentially are trapped and all the Grumpuses who joined the expedition are off doing their own thing and struggling to survive. 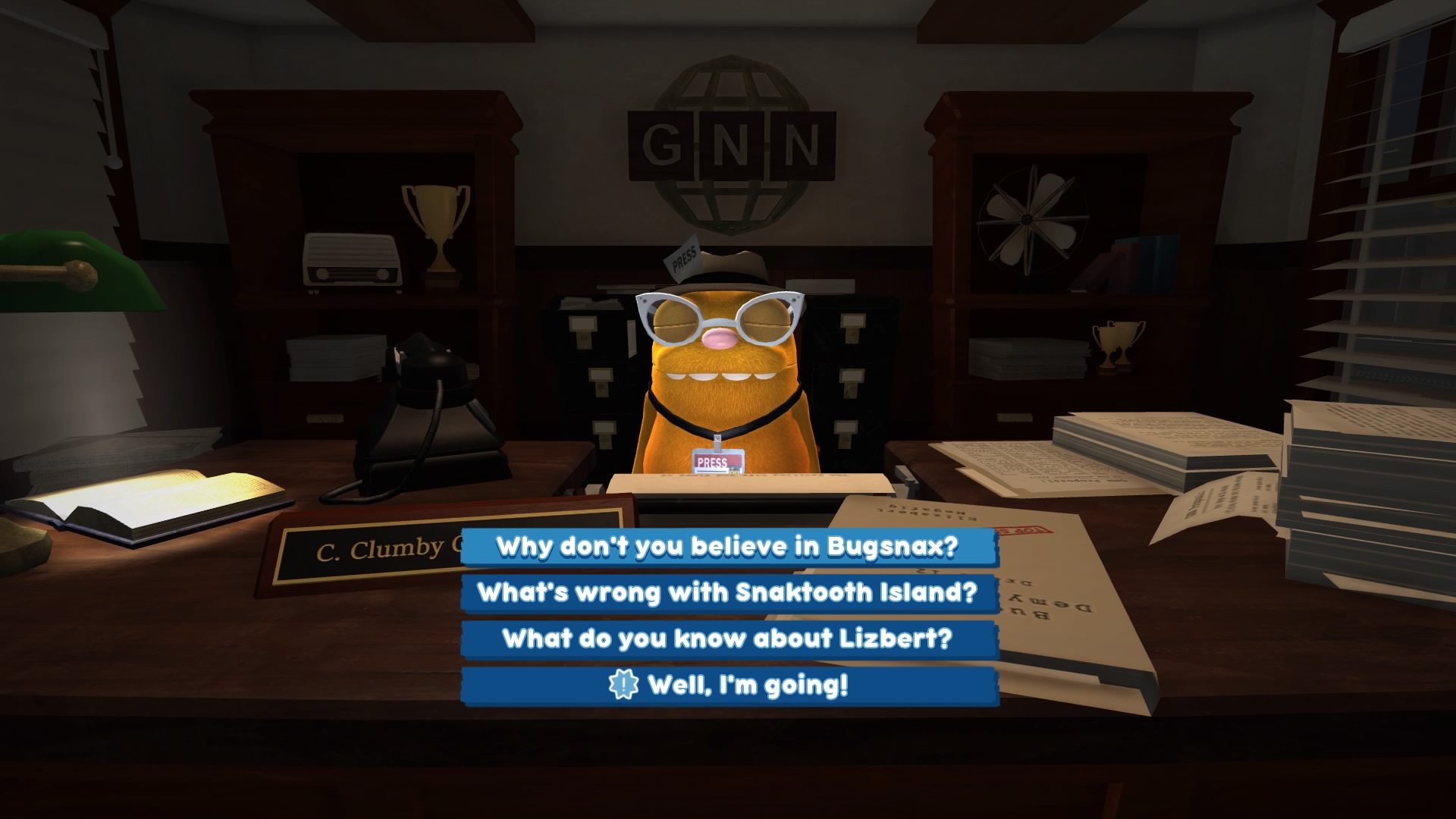 Once you’re there, Bugsnax is relatively straightforward. It’s filled with characters that fall into certain archetypes. There’s a bumbling, but good-natured buddy named Filbo Fiddlepie. He would very much like if everyone got back together. There are characters like a gruff farmer, a spirited musician, a rancher appalled at the idea of eating “his kin” and a doctor who seems to genuinely want what’s best for the community. The Grumpuses are designed to be clever and charming, and for the most part they are. Which is good, because it does incentivize wanting to help them out.

But really, Bugsnax is one of the most Pokemon Snap-like games I’ve played in recent years. You know, but with collecting creatures to eat, rather than taking snapshots of them in their natural environment. All of the Bugsnax have their own tendencies. They behave in certain ways, love specific items, appear at different times of the day and may even abhor some weather conditions. This means you’ll need to have different sauces on-hand for your slingshot, ready assorted catching methods and be prepared to spend a lot of time experimenting with triggers to catch certain characters. Or, in some cases, to lure them to specific spaces to make other events happen. 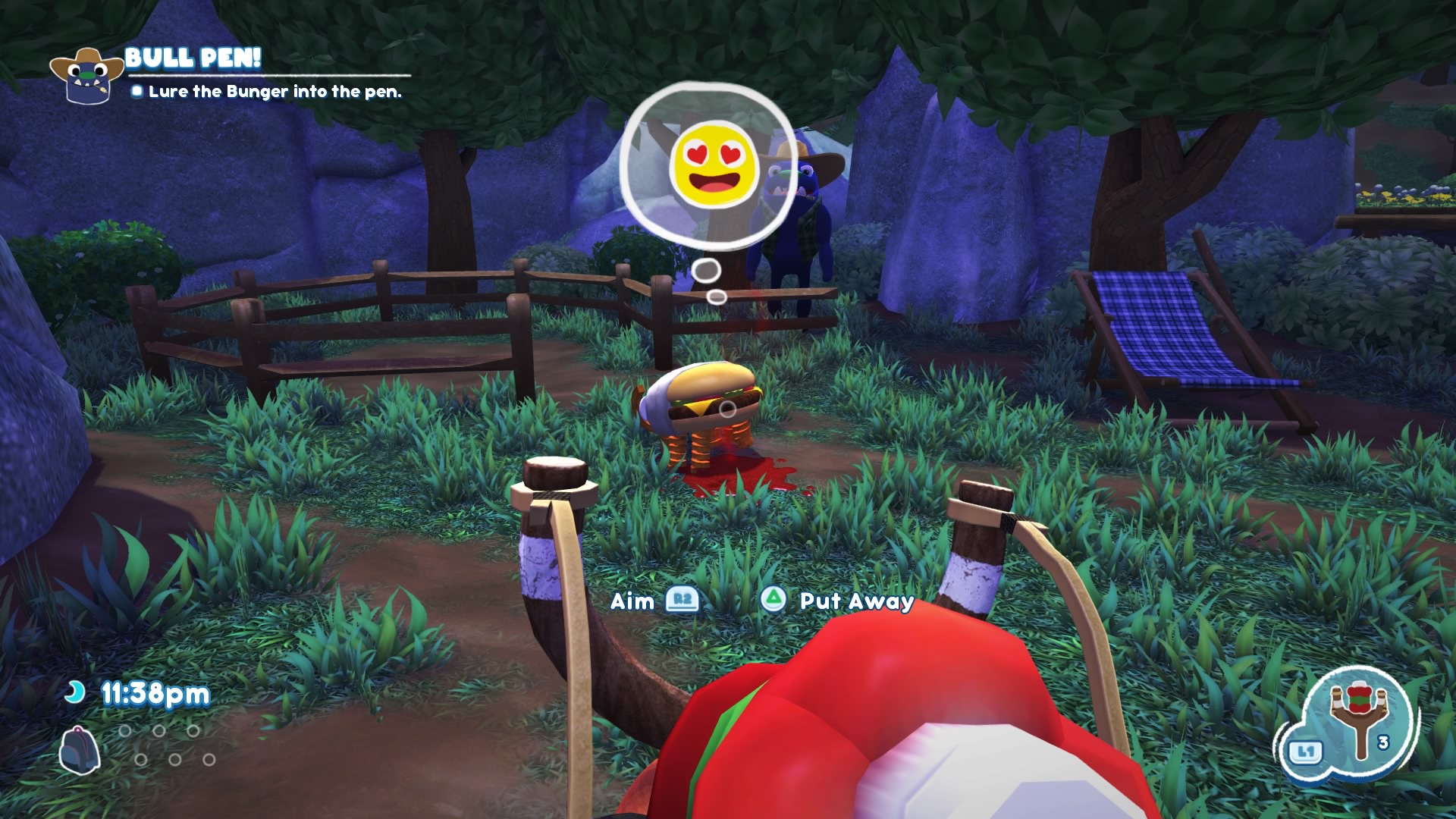 The earliest example comes with the Bunger, which is too large to catch in a trap. Its fanatical about ketchup. You can use that to make it attack other Bugsnax or environmental items so you can perform other catches. But eventually, you might find yourself coating a Strabby in a hamster ball in chocolate sauce to force a Kweeble to visit a certain area. Like Pokemon Snap, it comes down to timing, knowing your prey and figuring out the puzzle that makes it behave the way you want it to.

Everything else in Bugsnax relies on investigating and catching these insects, so you better enjoy first-person explorations. Before you can find out what happened to the missing Lizbert, you first have to reunite the community by convincing the participants in her expedition to return to Snaxburg. Which they will only do if you provide food, Bugsnax, for them in the way Lizbert used to. Once they’re in town, you conduct interviews that offer insights into who they are and how things went so wrong on Snaktooth. Which can mean revisiting sections of the island to catch more bugs to meet more objectives. Don’t worry, though, as the Bugapedia tells you where each one lives, what it loves and lets you know how to lure one into your grasp. 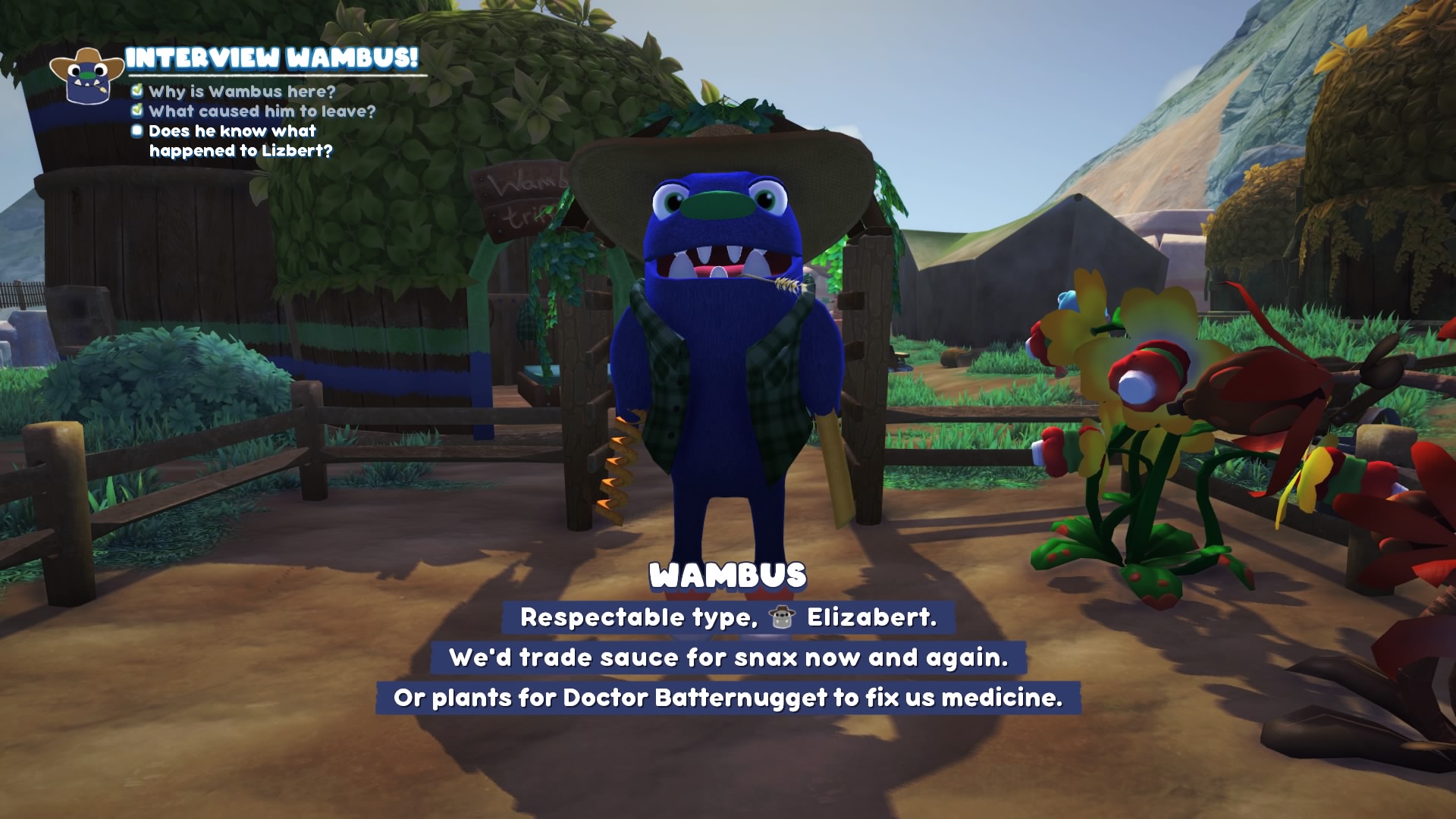 It’s a game where things are generally fine and work well enough. Your menu keeps things organized, showing quests connected to each person and a Grumpedia that tells you about the island’s residents. Catching Bugsnax is fairly simple. It moves at a good pace. It is a tad buggy, for lack of a better word. I had to quit and reload a save during the initial catching tutorial, as a certain Strabby decided to not respawn after an incident with a Green Lollive and a trap. In another instance, Sprout, the Strabby in a ball, ended up basically being knocked into next week by another bug chasing it. Trying to summon my buddy back wasn’t working, but exiting and reloading.

I think the best way I can describe Bugsnax is that it has strong launch day energy. This is absolutely the game people grab as a fun, quick palette cleanser as they move from, say, a Marvel’s Spider-Man: Miles Morales to a Demon’s Souls. It isn’t too long. You could probably do everything you’d really want or need to do in a weekend. It isn’t taxing. My launch PlayStation 4 wasn’t gasping for breath after each play session like it did after I fought crime with Miles. 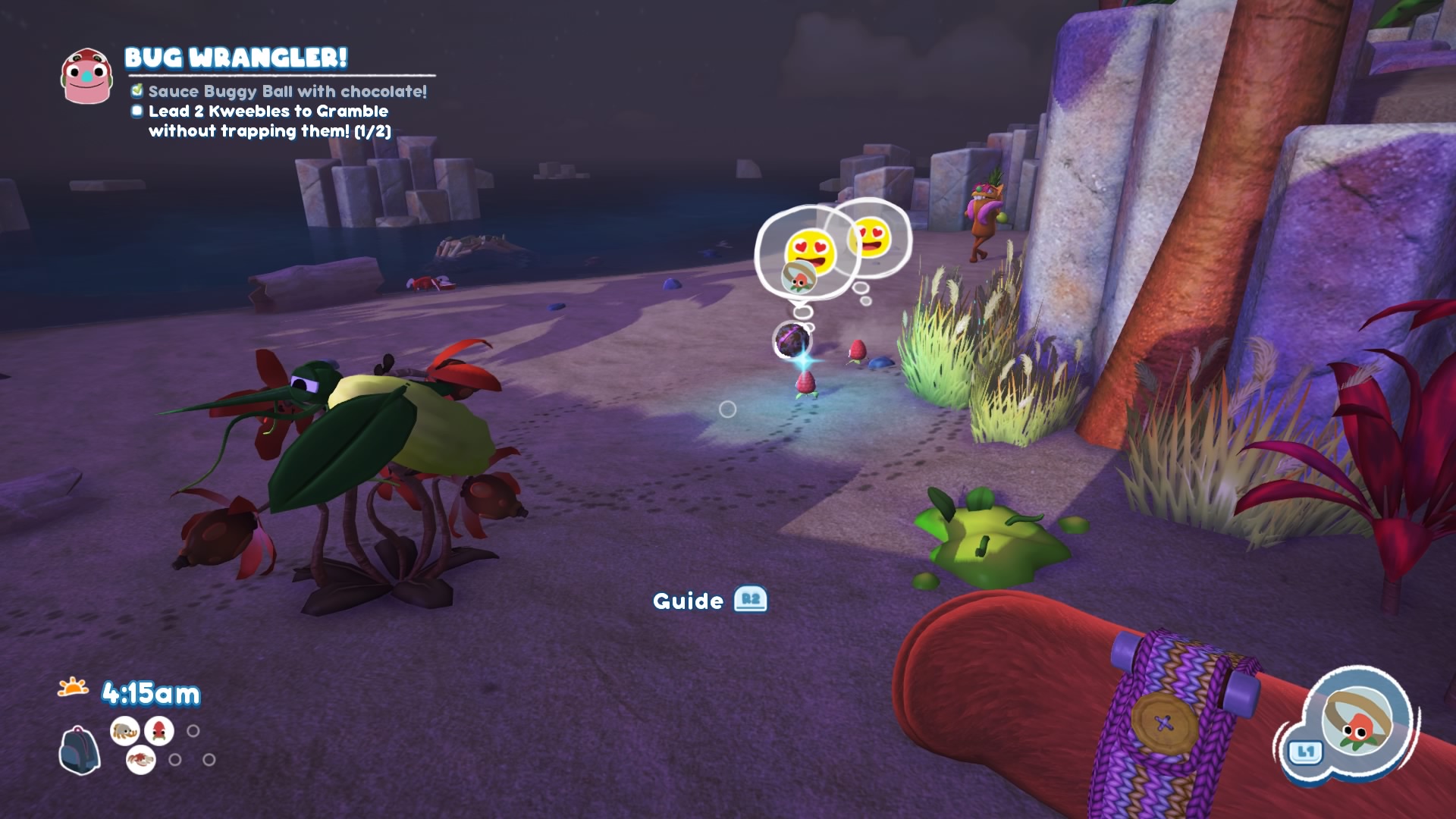 I had a fine time on Snaktooth Island with Bugsnax, but like Young Horse’s Octodad, I don’t feel a need to return anytime soon. And that’s okay, because a launch gaming library definitely needs a pleasant, concise sort of adventure like this. While I played it on a standard PlayStation 4, I suspect its colorful characters and environments will turn out to be a bright and family-friendly showpiece for the PlayStation 5.

Bugsnax takes you on a whimsical adventure to Snaktooth Island, home of the legendary half-bug half-snack creatures, Bugsnax. Invited by intrepid explorer Elizabert Megafig, you arrive to discover your host nowhere to be found, her camp in shambles, and her followers scattered across the island alone... and hungry! It's up to you to solve the mysteries of Snaktooth Island: What happened to Lizbert? What are Bugsnax and where do they come from? But most of all, why do they taste SO GOOD? PS4 version reviewed.
7