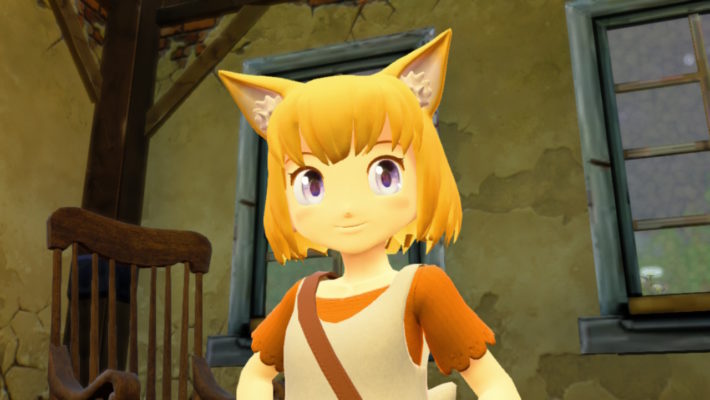 There are certain games that exude a sense of innocence. Like when you’re in that world, nothing bad can happen to you. You’re safe. You have the potential to be happy. Even if you do falter, it’s no big deal. Just dust yourself off and enjoy facing no negative consequences. This is what playing the Giraffe and Annika Switch port is like. The game isn’t entirely perfect or polished, but there’s a sweetness to it.

Annika is a young girl who wakes up on Spica island, has no idea how she got there, and finds herself roped into a task by Giraffe, a young boy she doesn’t know that seems to know her. She’s apparently the last Felycan, as evidenced by her cat ears and tail, which is a race capable of entering a series of ruins that hold Star Fragments. Star Fragments that Giraffe apparently needs for some unknown reason. However, Lily, the Witch of the Forest, is also after these precious relics, which means you have a rival thwarting Annika every step of the way. 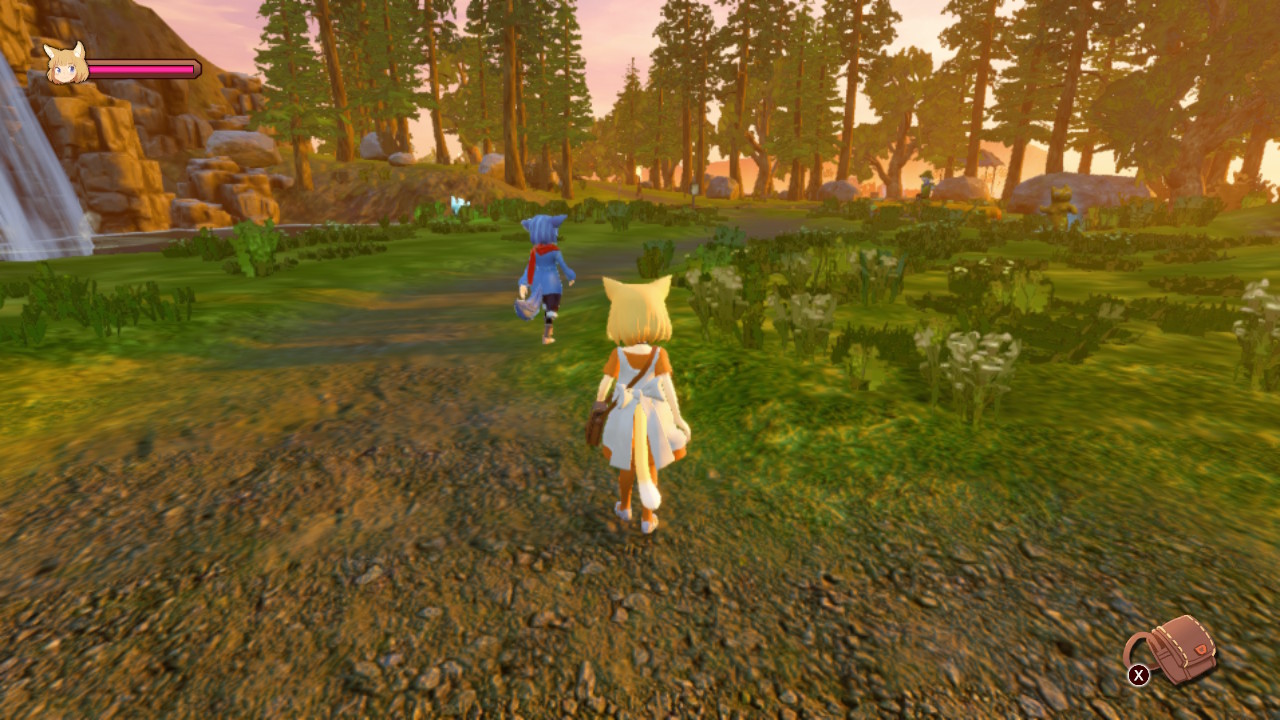 While there are “dungeons” and “enemies” in Giraffe and Annika, they’re toothless. Nothing is really any threat to her. If a ghost touches Annika, she loses a little health, and it typically isn’t too difficult to get away, especially after you’ve unlocked the ability to jump. Crystals are scattered liberally around areas, and standing next to one is enough to regenerate her health. It turns into a rhythm game when you’re fighting bosses, like Lily or a King Crab who menacingly declares it “Clawbbering time.” Not that those are too much of a deterrence if someone dislikes those, as you can set the difficulty to easy and breeze through it.

Which means that really, this is more of an adventure game where occasionally you have to go through an infested dungeon or participate in some rhythm battles. For the most part, Annika is exploring Spica and interacting with the people who live there. Maybe that means finding a rabbit mother’s five bunny babies. You can discover things items designed to add a little flavor to the game and its world or secrets, but its mostly rather straightforward. (Though, if you do invest the extra time, an already heartfelt and touching game can get even more satisfying.) 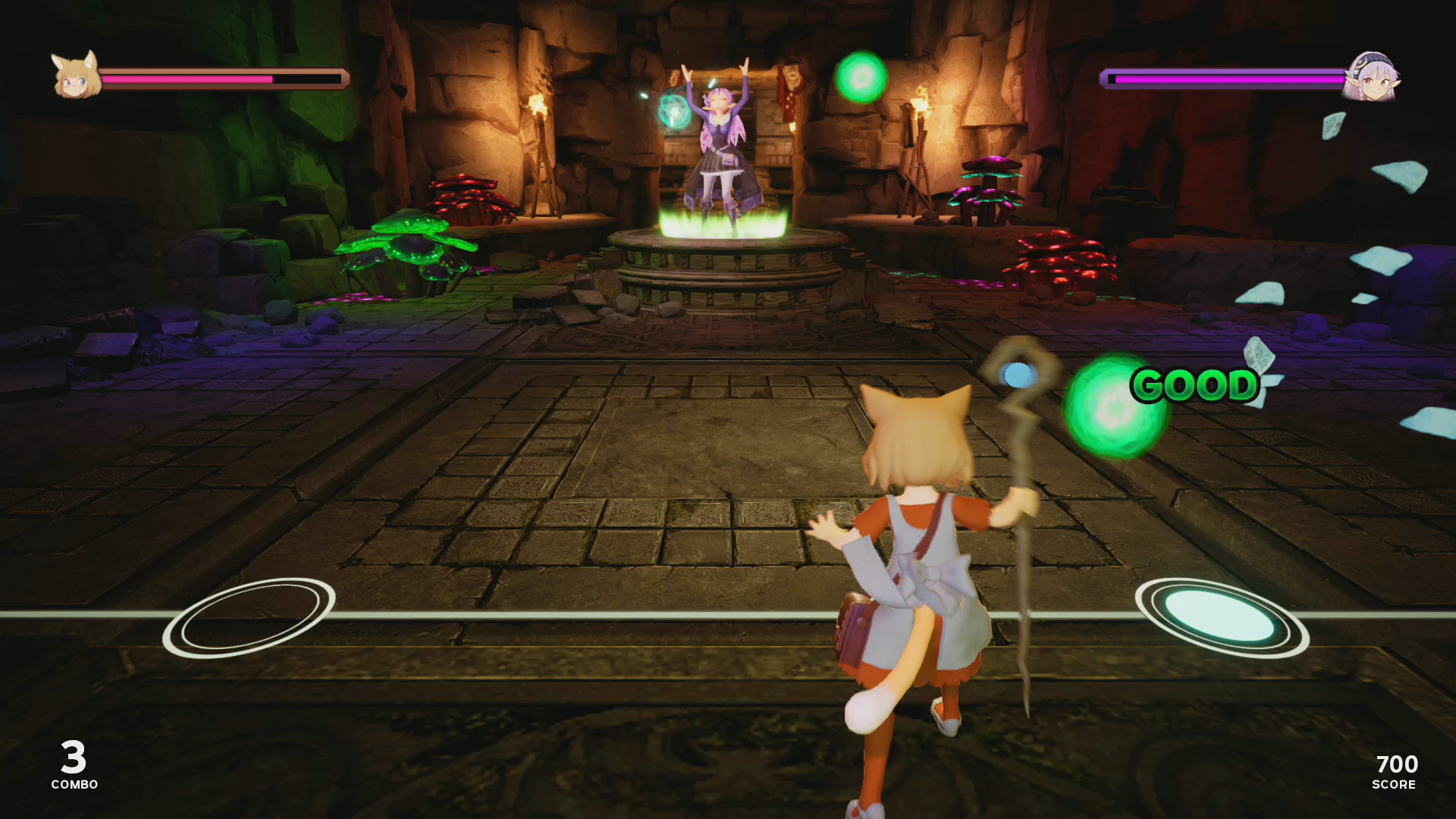 I’d almost say Giraffe and Annika does too much hand holding. Giraffe will actually walk to “guide” you to certain locations. There’s no real threat to it. The rhythm segments aren’t terribly difficult even on the normal difficulty level. I imagine younger players or those just getting used to platformers would appreciate it, but it can almost make an otherwise pleasant game a bit tedious.

Especially so, since the Giraffe and Annika Switch version definitely feels like it needed a few more finishing touches. It doesn’t look great on the Switch, with some blurriness keeping it from looking as crisp as, say, the earlier PC counterpart. There’s a floatiness to Annika’s movement, where it sometimes feels like she’s disconnected from the places she’s going to or walking on. This is especially true when moving along some bridges or platforms. Before I unlocked the ability to jump, it was weird to move her towards objects around her and see her kind of just be on them without even climbing or jumping? You can tell a lot of effort went into this slice-of-life tale, but when you play around with the controls or explore, you’ll wonder if a little more went into the animations, design, or control, it would feel a little more solid. 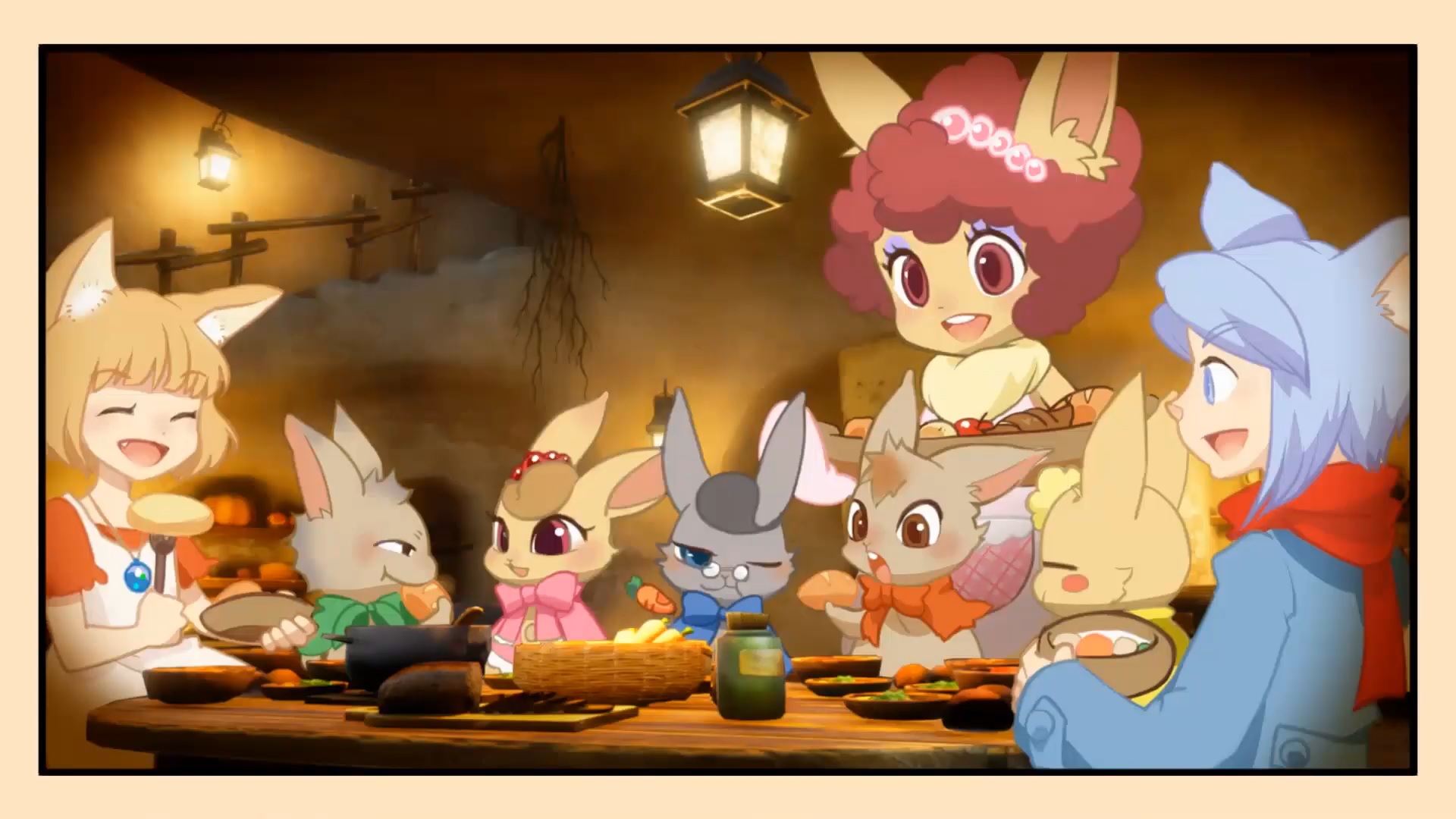 Still, even with the small nitpicks, there are quite a few things to enjoy in a low-pressure game like Giraffe and Annika. 2020 is a year that is taking its toll on all of us. It isn’t perfect and can feel a bit simple, but Giraffe and Annika is also the sort of ephemeral, effortless, and enjoyable activity that might make someone smile for a while. It might be exactly the right sort of next step for someone new to the Switch who picked up the console for Animal Crossing: New Horizons or inexperienced with games.

Giraffe and Annika Switch and PlayStation 4 versions will arrive on August 25, 2020 in North America and August 28, 2020 in Australia and Europe. It is immediately available on the PC.

A magical, mystery-filled adventure awaits! When a young girl named Annika awakens from a strange dream, she finds herself stranded on the mysterious "Spica Island" with no memory of how she got there. Upon exploring, she meets a boy named Giraffe, who seems to know her, and is tasked with finding three special star fragments on the island in order to unravel the mysteries of her forgotten memories. While searching for the fragments, Annika meets Lily, the Witch of the Mysterious Forest, who challenges her to a battle! Fortunately, Annika emerges victorious, and uncovers a star fragment. She absorbs the fragment and is suddenly granted remarkable visions. What secrets await this unlikely trio of adventurers on the island of Spica? Giraffe and Annika Switch version reviewed.
7