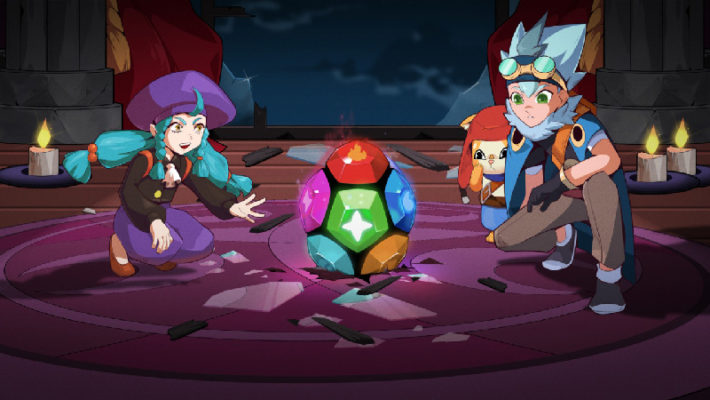 The monster-collecting genre that Nexomon: Extinction enters has become increasingly crowded in 2020. While “here’s something you can play until the next Pokémon releases” has been a staple over the past two decades, it wasn’t this frequent since… well, probably 20 years ago. So you can’t just be “one of these.” You have to offer something special.

We won’t waste your time explaining the basics of what you do in Nexomon: Extinction, because it is unabashedly one of those. Nothing about Pokémon’s general gameplay structure is really messed with here. You’ll catch lots of monsters. You’ll battle tamers. There’s tall grass. There are healing centers and shops. It’s all very familiar, and intentionally so. It differentiates itself through its large-scale design ethos and its individual, small-scale systems.

For example: its monster-catching. Nexomon wants this to feel more involved and earned, with a host of factors playing into whether a catch works. There’s food, and each species has favorites that work better. There are passive items to earn to raise your base percentage for each type. There’s a quick-time catch sequence to help even more and make catching more active than hitting “throw” and holding your breath. Of course, health and status conditions also affect it. As a result, catching is more of an investment, both of effort and in-game currency. You’ll often need to consider when and what to catch. And when you do catch something, you feel like you’ve earned it. 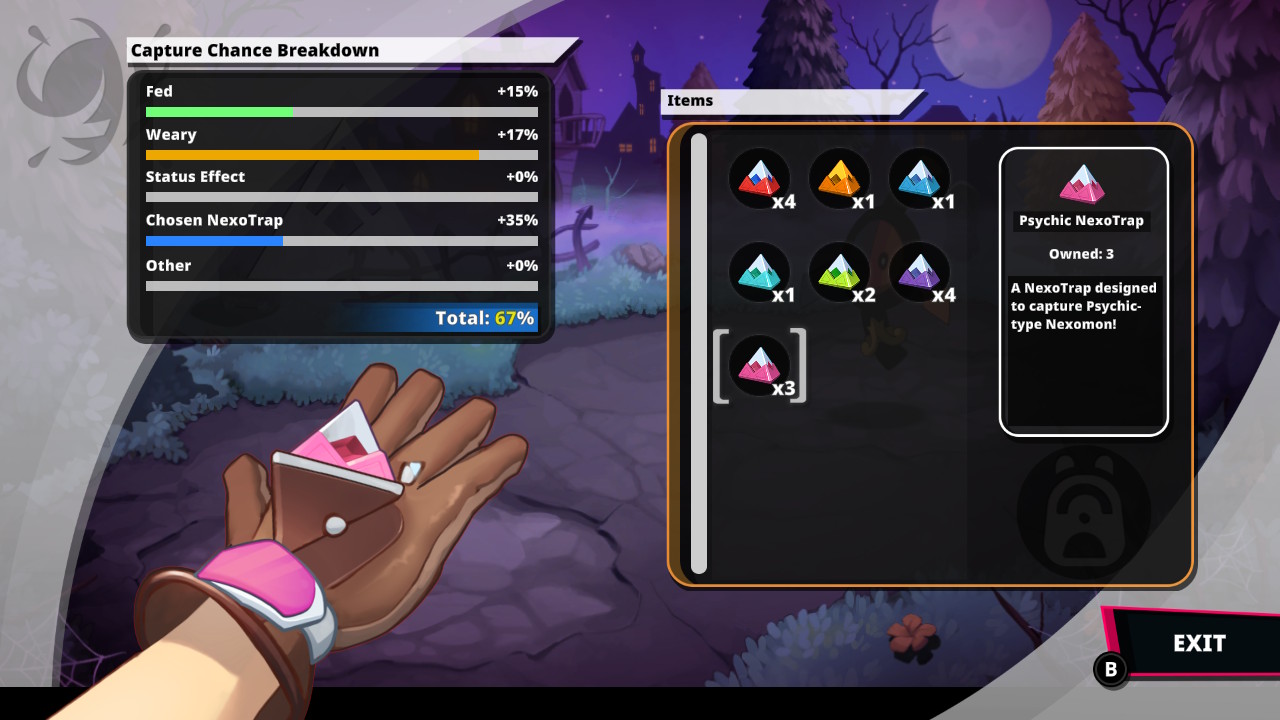 Battles are streamlined, but also a bit more punishing than the base Pokémon experience. Monsters only have one type, and they generally level up and learn moves at a slower rate than modern games would have you expect. Moves consume stamina, a fairly popular solution in the monster game community to the “stronger moves are always better” problem, and a more exaggerated accuracy difference makes those simple early moves way more viable. (Which, again, is good, because you won’t replace them very quickly.)

On a larger scale, Nexomon: Extinction aims to deliver on the promise of an open world that Pokémon never delivers in its campaigns due to its constant gating and hand-holding. Extinction is a big game with lots of freedom in both movement and action. There are quests to follow, if you want. There are traders with interesting items, and getting what they want in exchange is a sort of quest itself.

There’s a main story to follow, sure, but only if you want. You can also just take off to an island resort in the opposite direction. The game only blocks the bare minimum of locations to keep its narrative intact, and its progression-based monster strength and item availability means that going somewhere you’re “not ready for yet” is way less of a thing. Even when you get back on the rails of the central quest, Extinction goes out of its way to give you off-ramps and encourage you to do your own thing for a bit. But all those side quests and rare creatures keep this exploration from feeling aimless. 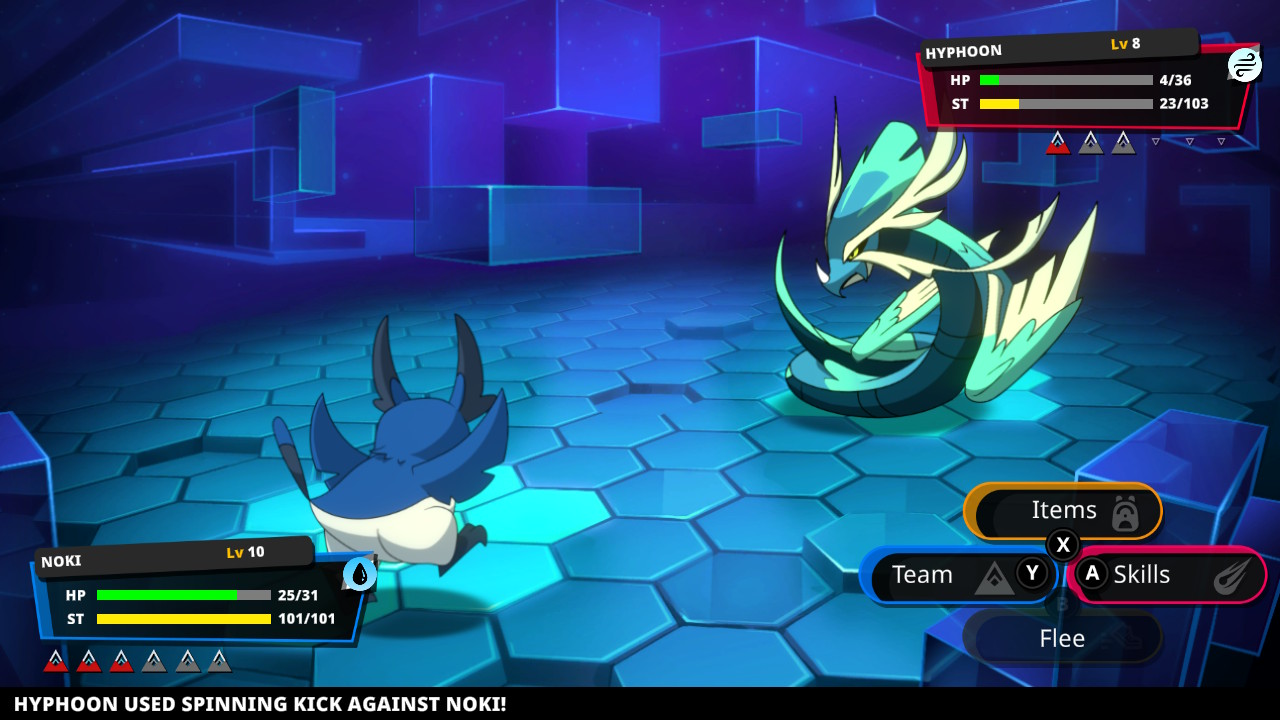 Among its 2020 taming game peers, Nexomon: Extinction feels the most complete and fully-realized. This likely comes from developer Vewo Interactive’s experience making the first Nexomon. That game did a lot with a little on iOS and Android, and both that work and that training serves Extinction well as it tries to go head-to-head with Game Freak on a much smaller budget. Its mobile style allows the game to run well and look really sharp with limited 2D assets. Its focus on functionality and content breadth over tech bells and whistles means there’s a lot to do. Not even attempting the boondoggle of building a multiplayer infrastructure leaves that aspect for its peers and lets it focus on fleshing out the single-player experience.

To illustrate the point, let’s talk about one example: your overworld character and follower. There’s no in-depth customization system, and you can’t just pick any Nexomon to follow you around. It’s a lot of work to make all those assets! But you still get enough to feel similar: a selection of pre-built avatars with various styles and colors, and a system of collectible followers to find and equip.

Often you’ll find what would be an entire building in Pokémon boiled down to a single, recycled overworld NPC that tells and gives you the same stuff. A lot of animations are very similar. Nothing stresses the technical capabilities of any of its platforms, so it runs hiccup-free even on Switch. It smartly limits its ambitions on systems that ultimately don’t affect gameplay that much, and it doesn’t get tripped up by them. 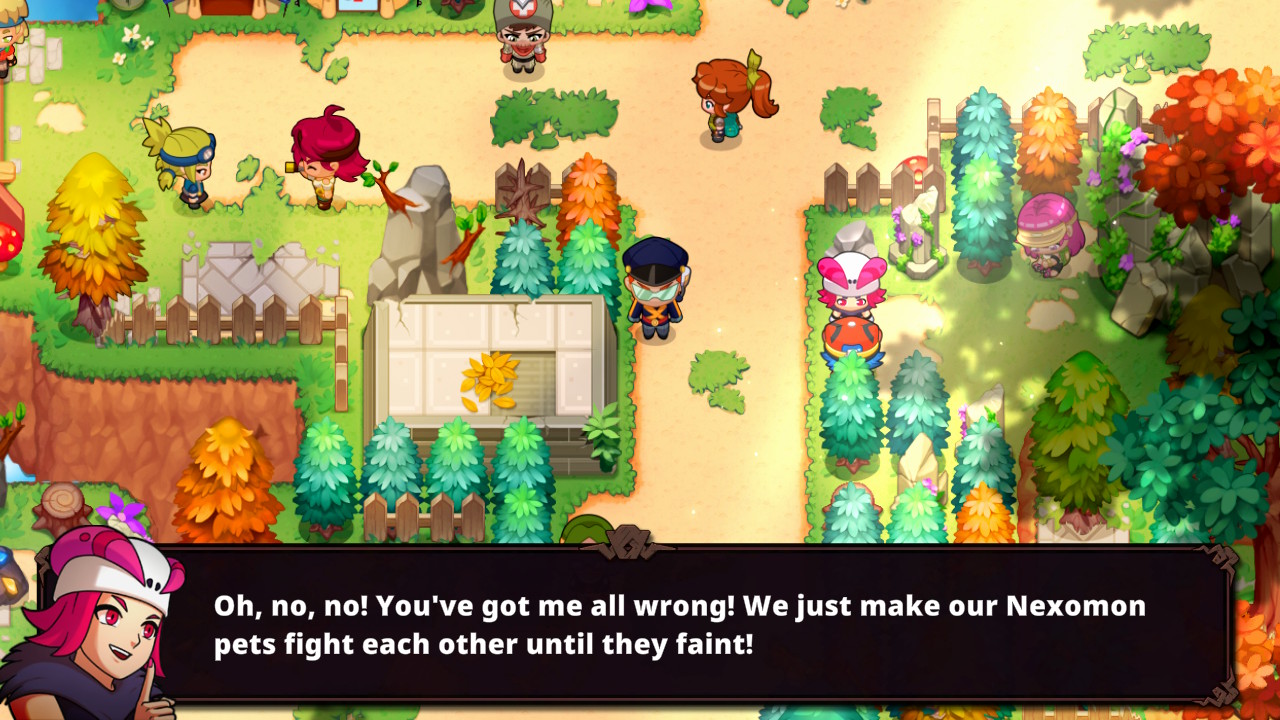 Nexomon: Extinction’s writing is exceedingly snarky and often focused on picking apart genre tropes. Whether it’s conforming with the Pokémon standard or bucking it, it’s more than happy to point out every ludicrous conceit. The fourth wall is enthusiastically shattered at every turn. It’s a tone that fits well with an audience that loves the genre but doesn’t think it’s perfect, and that’s pretty much the audience that would venture away from Pokémon and look for something else. The result is a game that could have felt heavy-handed and overly dark with some of its plot elements, but since it doesn’t take itself seriously, you won’t either.

In many ways, your interest in a monster-catching game is driven by whether one focuses on aspects you particularly like. Like competitive play? Or meticulously customizing creatures? But Nexomon: Extinction puts its best foot forward, delivering the most polished version of itself it can offer. And often, polish is what many players miss when exploring outside Pokémon’s safe, well-padded confines.

Nexomon: Extinction will launch August 28, 2020 on Nintendo Switch, PlayStation 4 and PC for $19.99. The slightly delayed Xbox One version is slated for release in mid-September.

Nexomon: Extinction is a return to classic monster catching games, complete with a brand new story, eccentric characters and over 300 unique Nexomon to trap and tame. The world is on the brink of extinction as mighty Tyrant Nexomon fight for dominion over humans and monsters. Join the Tamer's Guild and begin an epic journey to restore balance before all hope is lost… Switch version reviewed.
8