Road Redemption, the upcoming bike combat game that’s very heavily inspired by Road Rash, will have split-screen multiplayer for up to four players, the game’s developers have confirmed. In fact, Dark Seas plan to make it so the entire game can be played in drop-in/drop-out co-op. In a developer blog, they write:

Our goal, vis-a-vis splitscreen, is to include drop-in/drop-out co-op gameplay for the entire “single player” campaign.  With the technical aspects pretty much conquered, the remaining challenge involves the design.

For example, if you’re playing mission 20, and have a heavily upgraded bike and characters, what happens if your two friends come over and want to join?  Should they have to play mission 20 as level 1 characters or should they take on whatever stats your character currently has?

Dark Seas are actually taking feedback on the above topic, so you can make your voice heard if you have an opinion on the matter. Additionally, they’ve also shared the game’s control scheme for melee combat. Take a look at it below: 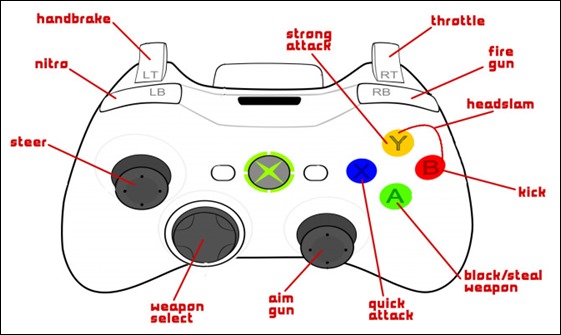 Throttle – Makes your bike go.  The more you hold down the trigger, the more torque goes to the back tire.

Handbrake (Quickturn) – Holding this button down allows you to make sharp turns.  Since Road Redemption is focused on combat, you won’t see super curvy tracks, but this button will be there when you need it.

Nitro – Hold the button down to get a burst of speed.  You can earn more nitro, mid-mission by taking down enemies in combat.

Quick Attack – A quick, low damage melee attack with whatever weapon is in your hand.

Strong Attack – A slow, high damage melee attack with whatever weapon is in your hand.  In addition to dealing a large amount of damage, strong attacks are more likely to deal concussive blows, which stun your opponent for a moment.  They’re also more likely to result in your enemy dropping the weapon in his hand, especially if it’s a gun.

Headslam – Grab your opponent and slam his head into his own handlebars.  If you’re familiar with fighting games, you can think of this as a throw move.  It’s unblockable, but you must be very close to your opponent to perform it.

Block – Hold the button down in order to block strong and quick attacks.  Depending on the weapon you’re blocking with, and other factors, there’s a chance that your opponent could brake his own weapon on your block.  While this means he has fewer options to attack you with, it also means his weapon is no longer there to steal.

Steal – If you press the block button at the precise moment of your enemy’s attack, there’s a chance you will steal his weapon, rather than simply blocking the attack.  It’s risky because if you press the button too late, you’ll end up taking a hit.

Kick – Kicking an opponent’s bike will send it flying accross the road.  This won’t cause your opponent any damage on its own, but could put him on a trajectory to slam into a roadside object or oncoming vehicle.  Like the headslam move, it’s unblockable.

Again, the above controls are in development and Dark Seas are taking feedback, so you can head over to their developer blog and keep track of how things are progressing. Road Redemption is in development for PC, Wii U and Mac.