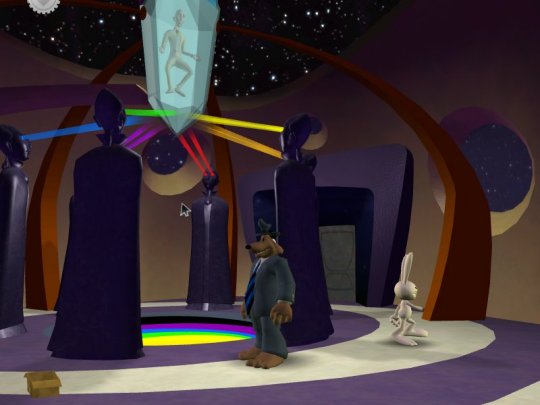 Since we are all here enjoying the cozy privacy of the Internet, let me tell you a little something. Confidentially, of course… Well, here goes: this review (of sorts) would have appeared at least a week earlier had I not become hopelessly stuck while playing through the final installment of Sam & Max. You know, that little point-and-click adventure cunningly named Bright Side of the Moon, for reasons obvious to those who finished the excellent Reality 2.0 episode. The grand finale of Telltale’s unsurprisingly brilliant experiment in episodic gaming, which has earned the honour of being the first gaming series to ever reach a damn conclusion.That one. Well, I got stuck and the review is late.

Actually, this being a Telltale games adventure and a point-and-clicker released in bloody 2007 when everything must be easy on the player, you can easily imagine that my lack of progress came as quite a shock. A frustratingly taxing, nostalgic, heck -even lovely- shock. Mind you, the game isn’t that difficult or anything, but it does include one or two tricky puzzles where slightly absurdist lateral thinking is demanded, and I, uhm, completely fumbled one of them. I got stuck toying with a silly hat and a renegade stomach for days, when the solution was right there in front of my eyes and added insult to injury by being quite obvious once I finally got it. Now, if that’s not a sign of some great puzzle design and a situation reminiscent of the day the walkthrough wasn’t a google search away, then what could possibly be? 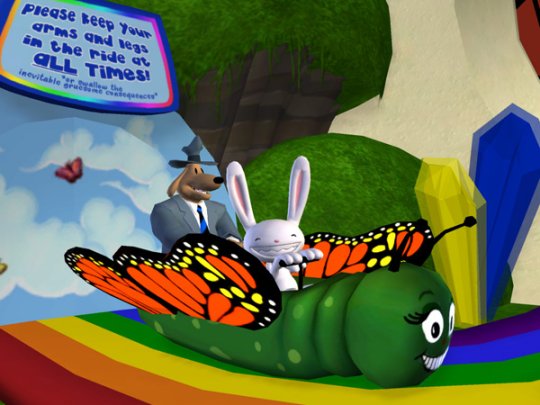 So, episode 6 is quite a bit more taxing a game and perhaps longer too than your average -or garden- S&M affair (heh). But does it beat the excellent design of Reality 2.0 or the paranoid surreal humor of Abe Lincoln Must Die? Frankly, no. The Bright Side of the Moon is neither the best nor the funniest of Sam & Max episodes. Still, its a pretty perfect ending to the series, constantly reminding players of its finer moments, tying up loose plot ends and providing a satisfying even if slightly silly ending. On the moon, no less.

Bright Side of the Moon is also the first Sam & Max episode to actually attempt telling a proper (make that a more traditional one) story. I mean, it’s got a working plot and tries to tie roller coaster rides, space tourism, cameos of every character in the series and the queen of Canada in a semi-coherent whole. Impressively, it manages to do just that, without happily sacrificing puzzle quality and more importantly variety on the storytelling altar. 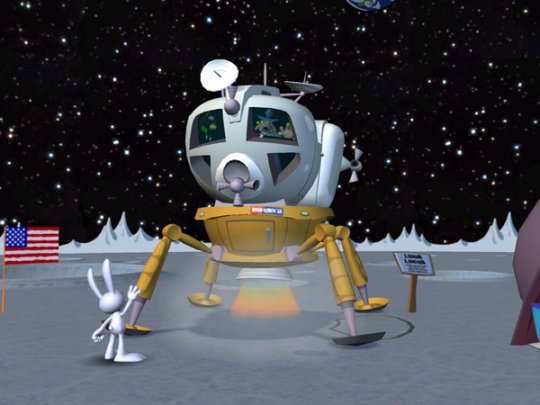 As we’ve come to expect (and that dear Telltale is no small achievement) all puzzles, regardless of difficulty, are organic parts of the story, whereas the voice acting is top-notch as always and the graphics are everything a gentleman with a sense of decency could ever ask for. As for this episodes unique song, well, it’s a brilliant (hilarious too) reworking of a Mad Mad World, that’s so great I’d say it’s better than the Mafia Land jingle of episode 3. Actually I must have listened to it over 10 times already, and that’s only 2 days after finishing the game, while being ridiculously pressured, unable to blog and in the middle of a game reviewing process.

On, the other hand, or to be more precise on the dark side of the moon, bad news is it’s gonna be awhile till we get another Sam and Max game, as episode 6 concludes Series 1, which reminds me to remind you to absolutely give the games a try. Or even consider them all as one epic mega adventure and start playing Season 1 now. Failing to do so, know you are not worthy of your PC. Go buy a console and never ever think of touching an adventure game again.