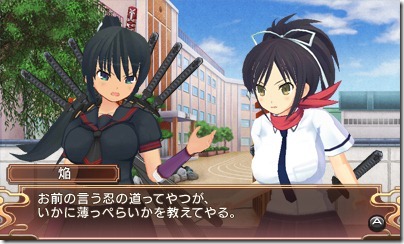 Marvelous Entertainment have announced Senran Kagura Burst: Crimson Girls for the Nintendo 3DS in this week’s Famitsu magazine. The game is a follow-up to the original Senran Kagura: Portrait of Girls, and has you playing as the opposing ninja faction—the Viper Academy girls—from that game.

Another change is that more of the game is playable in stereoscopic 3D this time, although it sounds like the action segments still aren’t. Marvelous say that the dressing room where you dress your female ninjas up will now be in 3D, which is a feature they tried to implement the first time around, but couldn’t.

Senran Kagura Burst: Crimson Girls is currently 81% complete. Bonus goodies include a visual book with illustrations, drama CD and soundtrack CD. The game is scheduled for release on August 30th.