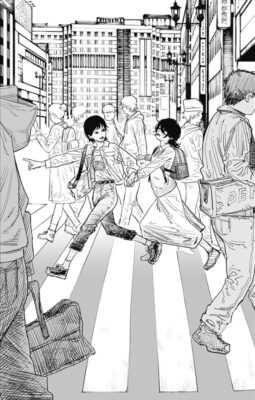 Tatsuki Fujimoto, the creator of the Chainsaw Man and Fire Punch series, created the 145-page short manga along with several prominent Shonen Jump Plus artists. The story follows the lives of two elementary school students with a passion for manga and their journey to become professional artists in the manga industry. It deals with themes such as creative rivalry, loss, and the regret that comes with looking back on the past.

After its release on July 19, 2021, Japanese social media was abuzz with praise for the one-shot’s emotional storytelling, reaching the top trends on Twitter for the day. Artists such as Solanin‘s Inio Asano, contemporary artist Takashi Murakami and Yoshitomo Nara were among many prominent figures that discussed the manga’s heartfelt themes.

According to Shueisha’s official website, the print version of the manga will release in Japan on September 3, 2021. While there are listings for Look Back on the Japanese Amazon storefront, it is currently unconfirmed whether the manga will receive a global print release.