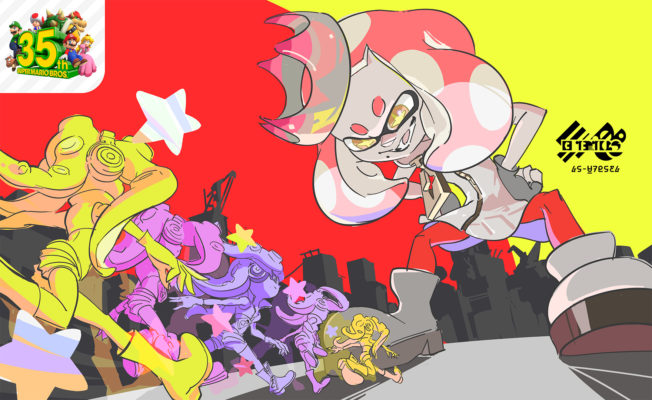 The Splatoon 2 Super Mario Splatfest is upon us, which means fresh art ahead of the January 15, 2021 event. For each event, Nintendo shared original art online of characters like Off the Hook’s Pearl and Marina. These always reference the theme of the event itself. So, it should come as no surprise that the Super Mario Splatfest art shows Pearl using a Super Mushroom, the power-up she prefers, while Marina is using a Super Star, her favored power-up, to run up to her.

The #Splatoon2 Splatfest is right around the corner! Pick #TeamSuperMushroom or #TeamSuperStar in game today, then help decide which Super Mario power-up is best when the action begins at 2pm PT on 1/15! pic.twitter.com/3nwqn1Imtv

As a reminder, there are two My Nintendo Splatoon 2-related missions at the moment that end on January 17, 2021. Both of them can count toward earning the new Super Mario 35th anniversary pin set. To complete one, you show up for this Splatfest and participate. To complete the other, you have to sign up for the Splatfest on the other official site. Click a button there, and you’re immediately entered to clear a mission and possibly win a Splatoon 2 coin for your performance.

You can also get Splatoon 2 Super Mario Splatfest shirts with art from the game on them. There are two designs available for $29.99 each. One looks like the Pearl Super Mushroom t-shirt people who are on her team wear in-game. The other resembles the Marina Super Star t-shirt. Each one is available in sizes XS through 3XL.

Splatoon 2 is available for the Nintendo Switch. The Splatoon 2 Super Mario Splatfest will begin on January 15, 2021 and end on January 17, 2021.