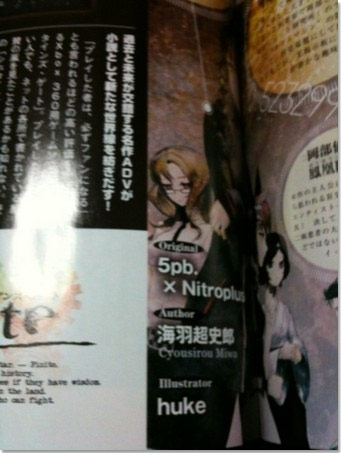 Amidst a stagnating visual novel market, Steins;Gate in particular seems to be doing rather well for itself. As of January, the game had sold over 50,000 copies on the Xbox 360 alone, with a recently-announced PC port that should — piracy not withstanding — help move a few more units.

Then, in April, the game was given an award of excellence by Famitsu. This is notable because Steins;Gate stood proudly amongst far more mainstream, high-profile titles such as New Super Mario Bros. Wii, Monster Hunter Tri and Demon’s Souls.

Now, according to the latest issue of Dragon magazine — a seinen light novel mag — Steins;Gate is set to be written into its very own novel. How different this novel will be from the source material, however, remains to be seen. As My Game News Flash point out, though; between multiple soundtracks and radio dramas, Steins;Gate is quite the phenomenon now.