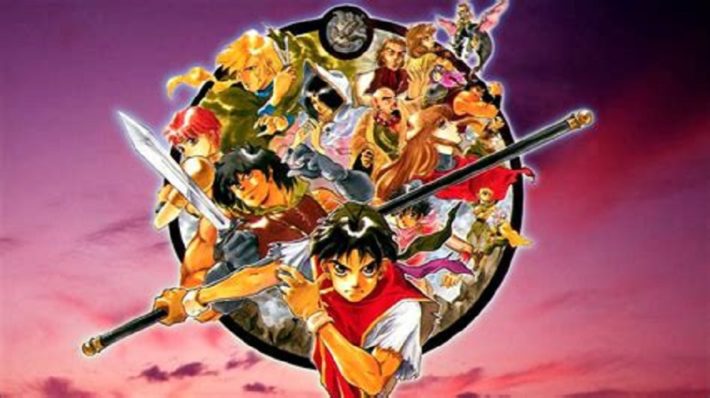 Suikoden fans are likely pretty excited right now. With the Eiyuden Chronicle: Hundred Heroes bringing together Yoshitaka Murayama and Junko Kawano, two of the minds behind the original Suikoden, to make a brand new RPG with tons of characters to gather yet again, it feels like we’ll be getting a new entry (albeit as a spiritual sequel) for the first time in ages.

But why are we all so excited? What was so compelling about the original (and the staggeringly good Suikoden II) that has us all clamoring for a new work from these creators? For me, it was the ability to gather so many party members and allies throughout the game, drawing together an unstoppable army of unlikely friends, shady folks, and heroic fisherman.

The 108 Stars of Destiny is a staple of the series, giving players over a hundred possible characters to take under their wing. Not everyone would join you in battle, but all would join your cause, help improve your base, increase weapon strength, or let you gamble, investigate, take a soothing bath, and more. Picture something like Pokémon, but instead of having your collected characters sit in a PC Box, they’d add some extra backstory, give you better items, help you gain extra money, or just meander about your home with something unique to say or offer. 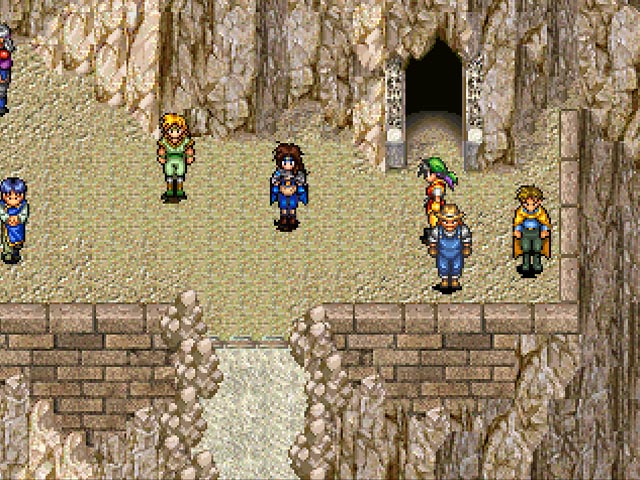 You might assume that these characters were made useful to make up for their lack of personality. After all, with so many possible characters to recruit, you’d think the developers might have had to create a bunch of throwaway people or flat characters just to fill out the ranks. That’s a lot of play styles, combat abilities, or gameplay enhancements you’d need to design, after all. On top of that, making one-hundred-and-eight compelling, touching, or silly personalities? When many games struggle to make even a handful of interesting, memorable characters beyond the main cast?

Suikoden’s character design – story, visuals, and play style – make for so, so many unforgettable characters, and with the rich back story that ties them all together throughout the series’ history, these stories have only gotten more interesting and intricate over time. A single game shouldn’t be able to have so many incredible, memorable characters and make it come together so seamlessly. It’s a narrative feat, and one I only appreciate more and more as I replay the games every few years.

Gremio and his doting nature can seem annoying at first, but his genuine love for the main character soon grew on me. Viktor, with his gruff, yet laid back attitude seem like a natural foil to Flik’s seriousness, but the two always come together when the Liberation Army needs them to. Pesmerga, who just looked ridiculously cool compared to everyone else. Sydonia, the thief who is eerily powerful, but doesn’t usually have all that much to say.

And Tai Ho. Dear, beloved Tai Ho, the Wild Fisherman. The guy who joins because he lost a bet to you and just seems to embrace chaos, judging from the look in his eyes. 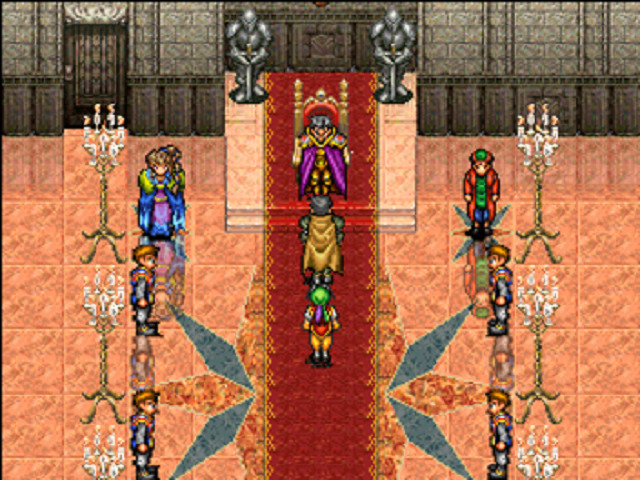 That’s just a sprinkling of the characters I can think of off the top of my head, but each has unique features and stories and play styles that make them interesting in their own way. Each had a great deal of effort put into their place in the world, what they want out of their existence, and why they would join your army in seeking freedom from the nasty Empire that’s cruelly running the world.

They all require something a little different from you to convince them to join, too. Some need you to have grown your army a set amount. Others need another ally to mention needing some help. Some need you to gamble with them and win big. Some need you to go to the same stupid town so many times, because there’s just a random chance for them to appear, and you’ve done it so much over the years that the first few bars of the town’s music are permanently etched in your brain and you start twitching if you even think about them. And some just need a bar of soap.

They’re small needs, in the grand scheme of things, but having to seek these people out, find out something about them, or take part in a small, memorable activity, or go with a friend or family member, creates a connection with the player and with the game world itself. Suikoden feels very interconnected and far-reaching, because you’re doing stuff that requires you know the lore, are paying attention to ties of family and friendship, or can remember a familiar face when the item they need shows up hours later. While you’re given many party members over the course of the story, you have to earn a lot of them, too, and it’s their needs—great, small, and personal—that help them stand out in their own way while also making an entire world feel connected. 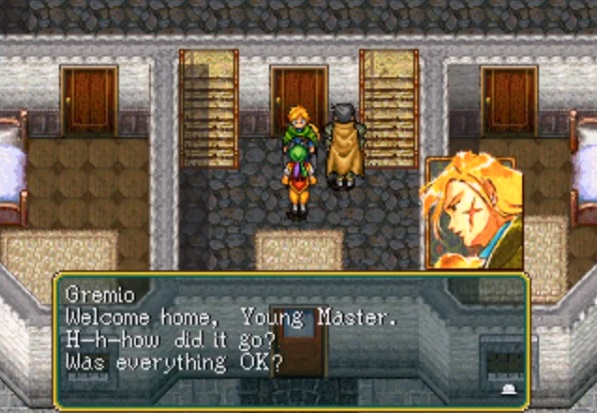 This cast adds so much delight to the game as well. In most games, you meet a few new characters in each area, but few of them will stick with you through the game. You’ll help a kingdom out, but then you’re on to the next place with nothing gained save for access to the new area. Suikoden frequently has new characters follow you from each locale and completed dungeon or mission. Many people you help will join your cause along the way, making it feel like you’re really gaining momentum and support for a global revolution. Every person you meet is also memorable in that you continue to see them often when you return to your castle base, recalling the circumstances of helping them. It makes events feel less like a series of video game missions and more like growing a crew of friends and allies to uproot the heartless empire that’s taken over the world.

Your castle ties all this together. As I said, party members that you gain will all move to your castle base. Here, they offer various roles that enrich your experience with the game or help you grow more powerful. On top of that, they often simply wander the castle halls for you to talk to, allowing you to steadily grow a home filled with all of the friends you’ve made throughout the course of the game. You can see the good you’re doing for this world in the form of the rogue’s gallery of people that meander around your home. You literally grow stronger by doing good, in a very visible way, by seeking people out and bringing them to your cause.

And so many of these people can join you in battle as well. A ton of them, while not the greatest warriors, will at least make an attempt in combat if you bring them out in your six-person party. Many of them have specific magic quirks only they can use, oddball weaponry, or just a unique face to bring into battle. It feels good to make a party of the game’s clear powerhouse characters, to be sure, but it feels more touching and memorable to bring together a group of characters you care for and have helped. 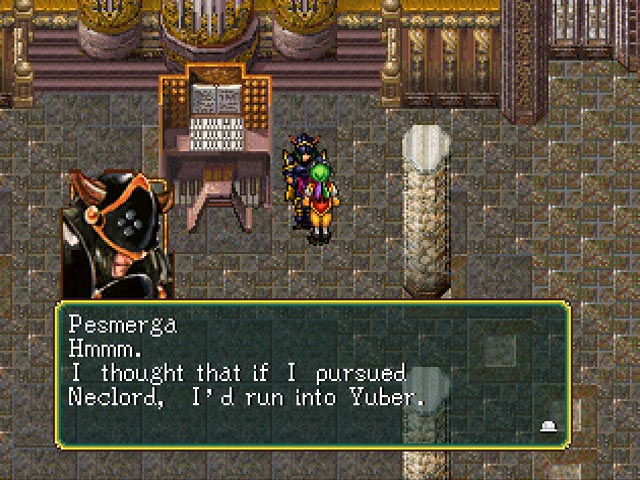 How neat is it to see the people of a town you saved join you on the battlefield? To see someone in your party that you helped with their troubles, and now they’re helping you? It feels just really good to face the empire’s most powerful forces with the people they once tried to crush under their heels. It feels really good to bring these people into battle with you to find justice for themselves, and with the variety of abilities, team-up attacks, and other spellcasting and fighting quirks many of them have, it makes battle fun and emotionally-connecting.

It doesn’t hurt that Suikoden has the best leveling system. Enemies give a staggering amount of experience when you first reach an area, quickly raising you to the recommended level for the area to make grinding feel unnecessary. And if you bring a low-level character into that same area, their experience gains are astronomical, bringing the character up to speed in a few fights. A level 1 character can shoot to level fifty in only a few battles in the right area, ensuring you don’t spend a lot of time repeating dull fights, but also that you can get any character you want up to speed in a hurry. If you want a certain party, you can have them ready in a handful of rounds.

While you’re forging a connection with these characters, the game also adds the very real danger of them dying permanently as well. Suikoden features a few story beats where you can lose someone permanently if you’re not careful, adding a need to take care of your people all the more. This is compounded by the game’s large-scale military battles, where you play what is essentially a high-stakes game of rock paper scissors (but instead with cavalry, archers, magic users). If one of your units gets heavily damaged here, you might just end up losing one of your comrades permanently. 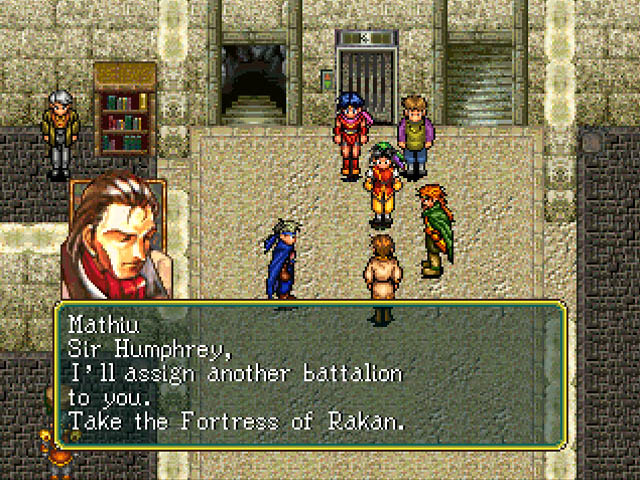 This permanent death possibility loans the game an incredible emotional weight, and your heart will be in your throat the moment you guess wrong on an enemy attack. These people, who you’ve brought together with your hard work and courage, and whose own bravery you’ve witnessed in having them come together with you, mean a great deal by the time you’re dragging them to war. To think about every quiet moment you’ve spent passing them in the castle halls, the battles you’ve fought together, and the good you’re trying to do loans the character’s death a power I rarely see in games. Most of the time, these deaths are scripted and cannot be undone, but having one of these beloved characters, so full of personality, die because of your poor leadership makes for a difficult thing to accept.

All of these elements come together to make Suikoden’s cast feel like friends and allies—like memorable people rather than characters in a game (to an extent). They feel complex and interesting, filled with sass and cowardice and vanity and courage in various measures, creating a diverse crew to tangle with the enemy of the people. They’re so incredibly memorable in who they are, how they join, and how they can be lost so quickly, that many of them have stuck in my memory for decades after the game was over.

This knack for character, through nuances of gameplay, narrative, and emotional depth in a scant few sentences, have me beyond excited to see what new works are coming from the Eiyuden Chronicle developers. I cannot wait to meet a whole new army of varied, intriguing characters all over again, and to find myself lost in the complex, connected worlds that Murayama and Kawano can create.