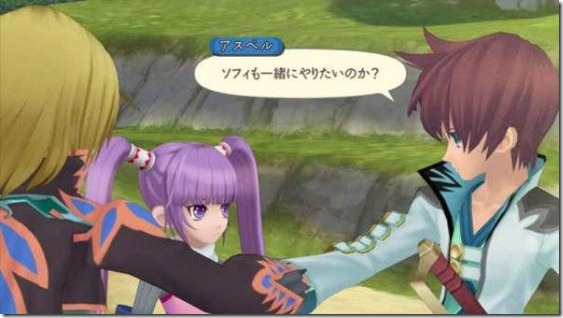 Tales fansite, Kingdom of Tales, have a fantastic interview with Tales Studio executive, Makoto Yoshizumi (yes, the one and the same), up on their site. The interview touches upon a broad range of topics, covering everything from the possibility of a Tales of Xillia release to more Tales games on the Nintendo 3DS to plans for high-definition ports of older Tales titles.

You can read the full interview here (it’s in French; scroll down a little bit for the English translation), but here are some quick highlights:

On HD ports of older games:

“This is something we would like to do and we are currently working to see if it would be possible to port older Tales games: Phantasia, Destiny, or Eternia, not only in Japan, but throughout the world. However, I still can’t give much information about this. We are still discussing about whether this project can be done and on which game console those ports would be made.”

On why Graces on Wii isn’t coming over:

“We wish to deliver the best and most complete experience for US and European fans, therefore we’re localizing Tales of Graces f. The game on the PS3 version is on a blu-ray disc. It would be next to impossible to condense all the game’s data on a Wii disc, so unfortunately, there will be no Wii release.”

“Actually we are planning for a release in summer 2012.”

On sales expectations for Abyss and future Nintendo 3DS games:

Well, that should make a lot of people very happy.

A tip of the hat to Fisico for the heads up. Thanks!