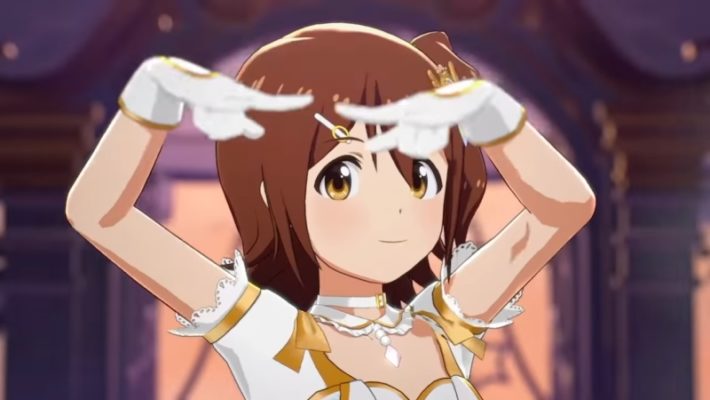 As promised in 2020,  The Idolmaster: Starlit Season live performance footage debuted for the first time. The game was shown off by The Idolmaster series General Producer Yozo Sakagami and Starlit Season Producer Hayato Kutaragi on the second “Starlit Report” livestream event. The team also took the opportunity to debut a new song from Starlit Season, titled “SESSION!,” performed in a music video by the idols of Project LUMINOUS. [Thanks, 4Gamer!]

The new song was performed by Haruka Amami, Makoto Kikuchi, Iori Minase, and Hibiki Ganaha from the original Idolmaster games, while the Cinderella Girls entries were represented by Nana Abe and Anzu Futaba. Million Live and Shiny Colors were represented by Mirai Kasuga and the Osaki sisters, Tenka and Amana.

The Idolmaster: Starlit Season is the second mainline Idolmaster title on current platforms, following 2016’s The Idolmaster: Platinum Stars on the PS4. In Starlit Season, the player will take on the role of a Producer at 765 Productions, the Idolmaster franchise’s main idol agency. The company is about to prepare for the “Starlit Season,” a grueling ten-month-long elimination tournament to determine which groups will participate in the inaugural mega-concert at the newly constructed Starlit Dome auditorium. To improve its chances, 765 Pro has teamed up with two other idol agencies, Cinderella Girls’ 346 Pro and Shiny Colors‘ 283 Pro, to create Project LUMINOUS, a supergroup featuring idols from all three agencies’ rosters. Starlit Stage will be the first franchise entry to feature playable girls from all four Idolmaster game brands together.

Bandai Namco also revealed a bit more about the gameplay systems returning in The Idolmaster: Starlit Stage. Stages follow three different “Rules” (or forms). Concerts are where players and their idols need to reach a target excitement goal to liven up the crowd. Auditions involve judges that make requests of multiple teams participating. Finally, Festivals are like competitive Concerts, with players attempting to outscore a rival group.

Players can also earn points to unlock beneficial skills by taking on daily activities, playing minigames, and interacting with their idols. Skills have a range of effects, from increasing the number of members able to participate in a performance, to canceling a rival’s score-boosting action during a Festival.

The Idolmaster: Starlit Season broadcast closed out by teasing the ability to perform selected songs onstage as collaborations between idols of different agencies (for example, up to five girls from Cinderella Girls and Million Live! performing together). “SESSION!” was one such song, and another was “Onegai! Cinderella.”

The Idolmaster: Starlit Stage is due for release on PS4 and PC via Steam in 2021. Currently only a Japanese and Asian release are confirmed, though Bandai Namco have mentioned the possibility of an English-language release.