If you’re a fan of niche Japanese games, you may recognize the names Cavia, FeelPlus, and Artoon—three lesser-known studios that were behind some of the most well-remembered Japanese cult classics of the early 2000s. Now, people from all three are poised to make a comeback together as First Studio, a Marvelous developer that has created titles like Daemon x Machina and Fate/Extella Link.

Cavia’s legacy is probably the longest-lasting of the three. Scrolling through its lengthy portfolio, you’ll spot an abundance of licensed wares, but in between those are more charming oddities like Drakengard and Nier (both developed under the directing hand of Yoko Taro), Resident Evil: The Umbrella Chronicles, Resident Evil: The Darkside Chronicles, and Bullet Witch.

Artoon and Feelplus’ resumes are just as interesting, if not as long. Artoon got its start in 1999 and worked closely with Microsoft on Xbox-exclusive games like Blinx: The Time Sweeper. Later, when Microsoft made a serious attempt to woo Japanese gamers, Artoon developed Blue Dragon, the company’s equivalent of the immensely popular Dragon Quest. Artoon would eventually go on to work with Nintendo and Final Fantasy creator Hironobu Sakaguchi on The Last Story—a game that felt more like Final Fantasy than Square Enix’s own games at the time.

Meanwhile, Feelplus was behind Lost Odyssey (another collaboration with Sakaguchi, and poised as Microsoft’s version of Final Fantasy), Ninety-Nine Nights II (“one million troops”), and a poorly-received third-person shooter named MindJack, where you would dive into the bodies of your opponents and battle cybernetic gorillas. That last one was published by Square Enix, which was more adventurous back in the day. 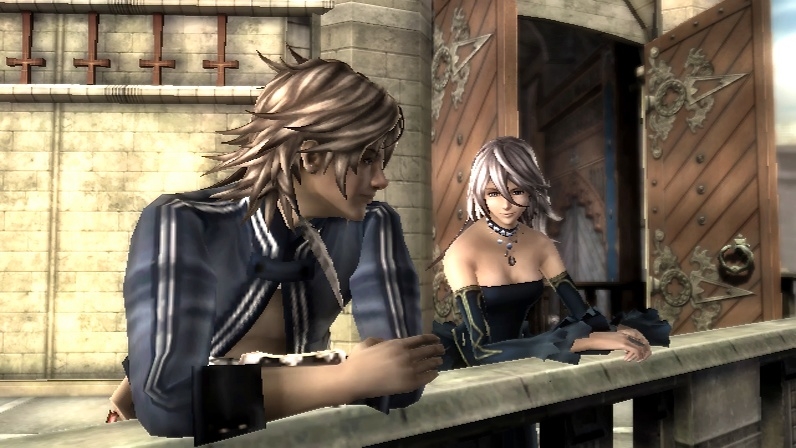 By 2005, Cavia, Artoon, and Feelplus had all been acquired by AQ Interactive, a holding company that also owned localization house Xseed Games. When Square Enix and other large Japanese publishers appeared to have lost their footing during a painful transition to HD platforms, AQI and its distinguished studios stepped up to the plate, churning out some of the most daring and fascinating games of the decade. Not every single title was a home run, mind, but for every MindJack there was a Lost Odyssey, and for every Moon Diver a Last Story. AQI competed on its own terms—with games that prioritized creativity and worldbuilding over technical or graphical wizardry.

Then, in 2011, AQ Interactive merged with Marvelous Entertainment, the maker of Rune Factory and Story of Seasons.

At the time, the merger seemed like a smart pairing. Neither company was doing particularly well, but both made the same kind of quirky, “AA” games. Marvelous had made a name for itself funding cult classics like No More Heroes and Deadly Premonition, and the company had bankable IP with Story of Seasons and Rune Factory, both of which would consistently sell well. Cavia, Feelplus, and Artoon’s talent would have access to Marvelous’ suite of considerably talented producers, and Marvelous would enjoy a steady, if sometimes inconsistent output of Japanese weirdness that did just well enough to justify its development. With a little luck, they’d even be able to turn the Bullet Witches and MindJacks into 7/10s, instead of 5/10s.

As you might imagine, it didn’t quite pan out that way. Once the two companies merged, Marvelous put AQ Interactive’s talent to work on considerably less daring games such as Fortune Street (a board game with Dragon Quest and Mario characters) and Fate/Extella, a hack-and-slash based on the popular “Fate” IP by Type-Moon. Then, in September 2011, Marvelous and developer Tamsoft released Senran Kagura, a Nintendo 3DS game involving busty ninja girls slicing each other’s clothes off. The game did well enough that Senran Kagura: Shinovi Versus, an even more titillating sequel, followed a year-and-a-half later on the PlayStation Vita. Following the success of that game, Senran Kagura 2, Senran Kagura: Bon Appétit!, Senran Kagura: Estival Versus, and Senran Kagura: Peach Beach Splash all followed in short order, accompanied by anime and manga spin-offs, posters, keychains, body pillows, and mouse pads shaped like breasts. Marvelous did have other games in development at the time, but there just weren’t enough of them to give the sense that softcore titillation hadn’t become the company’s primary business model.

For the next four years, the talents of Cavia, Artoon, and Feelplus were rarely seen outside of one-offs like Soul Sacrifice, a multiplayer game developed in collaboration with Sony, and intended to target the lucrative Monster Hunter market.

Capcom’s Monster Hunter series was riding high and the publisher was keen to explore new ideas using the brand. In April 2015, it announced Monster Hunter Stories, a Pokémon-inspired monster-catching RPG developed by Marvelous. What nobody suspected at the time was that Monster Hunter Stories would spark the birth of First Studio, a brand new Marvelous development team composed of a lot of that old AQ Interactive talent. Kenichiro Tsukuda, who would go on to become the head of First Studio, served as that game’s Line Producer.

“There was no studio name at the time,” Tsukuda recalls in an email interview with Siliconera. “It was called something like ‘Production Department Development Section,’ and we were developing various types of games. Since there were staff members who had a lot of experience developing action and RPG titles, we mainly worked on those two genres with our various partners. Back then, Capcom was planning to make a new RPG and asked me to join, so I became a member of the development team.”

Tsukuda had made a name for himself at From Software, serving as producer on Armored Core 2 and Armored Core 3. By 2007, he was at Feelplus, handling producer duties on Lost Odyssey. After AQ Interactive was absorbed into Marvelous, Tsukuda went on to produce Square Enix’s Fortune Street, Sony’s Soul Sacrifice: Delta, and Capcom’s Monster Hunter Stories under his new employer, each employing various members of the old AQ Interactive teams. But what really allowed the AQ Interactive staff to solidify under a new, unified studio was a development deal with Bandai Namco. In 2016, Marvelous struck up a conversation with Bandai Namco and convinced the company to let it handle development duties on God Eater 3, giving the AQ Interactive staff their next major project.

The development deal with Namco was spearheaded by Ittetsu Suzuki, who had served as a Chief Event Animator on Resident Evil: The Darkside Chronicles at Cavia. Suzuki had previously worked on a game that had crossed over with God Eater and used his connections at the publisher to propose a team-up.

“First Studio was formed in 2016,” Tsukuda confirms. “Before that, and before AQ Interactive merged with Marvelous, there were three different studios under AQI: Cavia, Feelplus, and Artoon. After this merger, those three studios acted as individual departments. But, to create bigger and better products, the studios themselves merged together into one greater whole, which became the First Studio we know today. We’re still a global challenger, and work hard every day to create products as ‘Marvelous’ as our company’s name. The entire team follows my belief in this, and they all help me to make that dream a reality.” 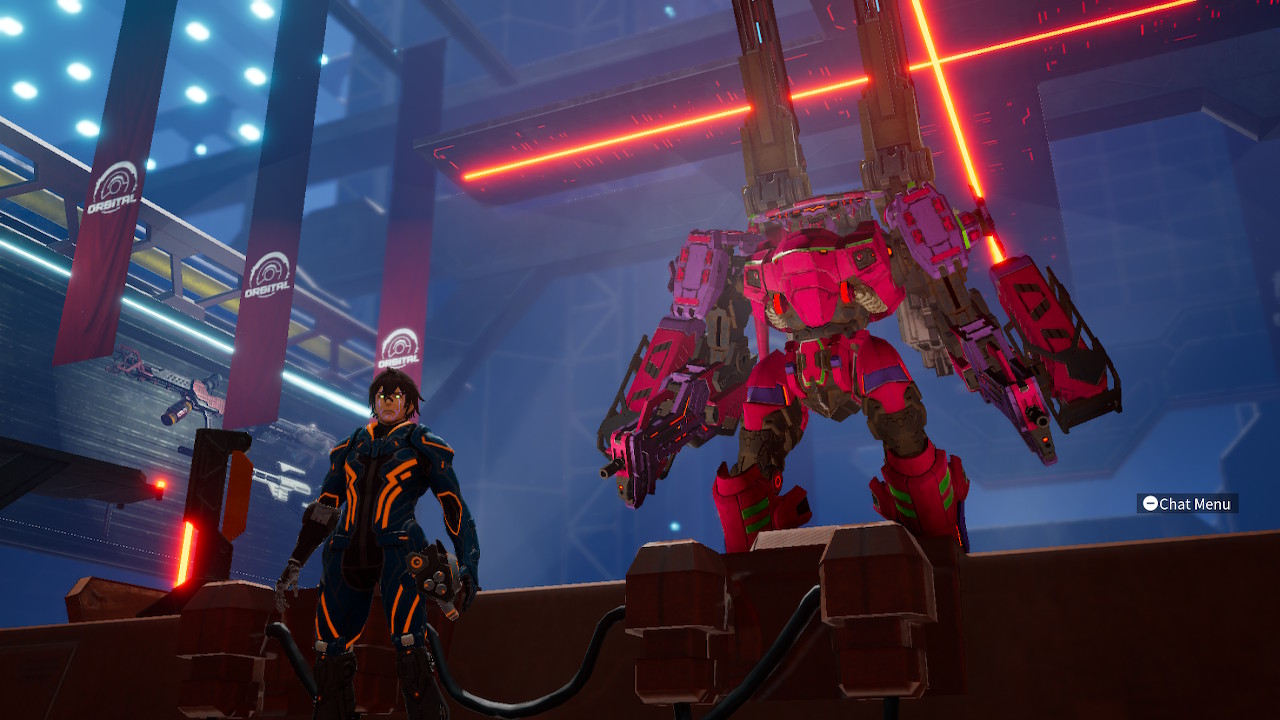 In fact, the credits of God Eater 3 and Daemon X Machina reveal that a chunk of Cavia, Feelplus, and Artoon talent is still employed at Marvelous and led various facets of the two games. Daemon X Machina’s lead planner was Noriaki Maruyama, who served as a game designer on MindJack. Meanwhile, lead programmer Yuta Kawano worked on both Blue Dragon and The Last Story. Lead character modeler Tsuyoki Iijima cut his teeth on Bullet Witch, Resident Evil: The Umbrella Chronicles, and Resident Evil: The Darkside Chronicles. Lead visual effect artist Satoru Kikuchi created effects for Lost Odyssey. On the God Eater front, lead game designer Yasunori Hirata served as programmer on both The Last Story and Blue Dragon. The list goes on, and while AQ Interactive will never be back in full, it’s reassuring to see that some of that old talent is still around and working on cool, new games.

I ask Tsukuda why he felt like creating a mech game after having left Armored Core behind years ago.

“It felt like the right time,” he replies. “AI has been advancing rapidly and computer graphics are almost indistinguishable from reality, and in Western countries creators [had] used the latest technology to explore mecha themes in films like Iron Man or Pacific Rim. I’m just a challenger in comparison, but I wanted to take a shot and see what I could make with today’s tools.”

It didn’t hurt that there weren’t a lot of games around that let players move freely across the ground and in the air, or a lot of mech games for that matter. Tsukuda shares: “There are so many sequels and similar genres lately, so I told Nintendo I wanted to try something different, and they were also looking to support fresh, new ideas. The goal was always just to make something interesting, and we just moved on from there.”

First Studio is here to stay, and when I ask Tsukuda what kinds of games they want to make going forward, he tells me the team already has new, original titles in development, two of which are action/RPG projects.

“Since both titles are original, we have a long road and an uphill battle ahead of us, but we are enjoying our work at the same time,” Tsukuda says. “There are so many things we want to create and ideas that we’d like to make into reality, so any support we get from players, platforms, and publishers is greatly appreciated. After all the work we put into Daemon X Machina, we’re delighted to see that many users from all over the world are enjoying what we do. That encourages us to work hard on our current projects… and gives us the urge to make a sequel. For now, our goal is to create games that can be enjoyed by lots of people across the globe.”

As previously reported, Tencent is now Marvelous’ largest shareholder, after it purchased 20% of the company’s stock. Marvelous aims to invest these funds in the development of its own IP, including Daemon X Machina, which lines up with Tsukuda’s plans for First Studio.

While he won’t be more specific as to what exactly lies in First Studio’s immediate future, Tsukuda adds: “Hopefully, we can present something by the end of this year, so stay tuned.”

Note: This interview was conducted in April, prior to the full ramifications of COVID-19 being felt by Japan’s workforce.