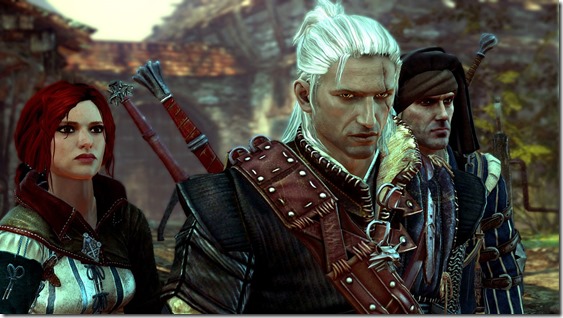 The Witcher 3: Wild Hunt is the end of the road for Geralt of Rivia. Born from a series fantasy novels and short stories from Polish author Andrzej Sapkowski, The Witcher has since starred in film, television, and video games, obviously. His latest interactive journey, slated to be the last one, is earmarked for the Xbox One and PS4. It was one of several next gen games that were on hand at E3. But very few, perhaps none, were as impressive as it, on a purely technical level.

Just the numbers alone, given at the behind doors presentation, were mighty impressive. A game that promises to be 20% bigger than Skryim, plus a world 35 times bigger than The Witcher 2. When all was said and done, the main mission, plus the side quests, and all the randomly generated missions, will total 100 hours.

Much of it will deal primarily with The Wild Hunt; a dark, destructive (as well as supernatural) force that is wrecking havoc all throughout the kingdom. The demo begins with a village that has been decimated by said spectral harbingers of doom; two weeks that have passed since, with Geralt on the hunt for the Hunt. 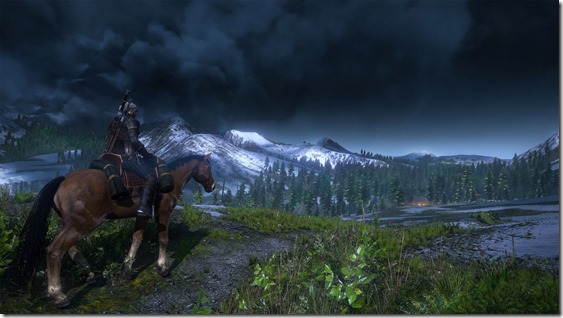 The landscape, which in this case is the Skellige islands, is a sight to behold. We’ve witnessed medieval landscapes before (see: Skyrim), but never before have they been as vibrant, teeming top to bottom with life. Every cloud in the sky, every blade of grass on the ground, is beautifully crafted and stunningly visualized.

Nothing demonstrated the technical prowess of the game more than when Geralt went to meditate on a cliff side. As time is sped up, we see the sun go up, then down, stars appearing on a clear night sky, then storm clouds gathering during the day, bringing with them stormy conditions. And it’s all about as photorealistic as you can get.

The game’s developers, CD Projekt RED, state that if you see something, you can go there, period. Granted, it will take time to scale that mountain, or swim across that large body of water, but it is possible, with absolutely no invisible barrier. Lofty promises, ones that have been uttered countless times. 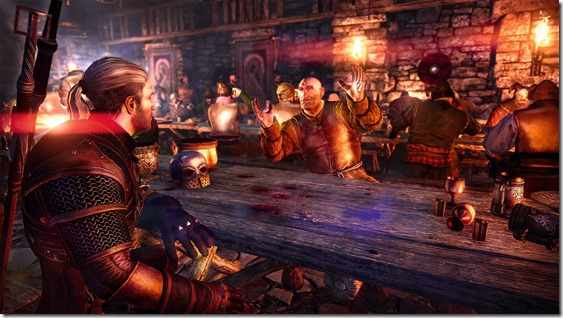 Yet, here it seems actually plausible. And more importantly, everything is so vividly realized that it’s all so inviting. You’ll want to believe the game’s potential and promises. The demo showed Geralt navigating the open seas via boat, crossing the countryside on the back of a steed, plus strolling through the rocky countryside on just his two legs. And one can’t wait to give it all a shot.

The name of the game in more ways than one is the Hunt, though the demo was designed to show off one of the many side missions. After getting some intel from an old friend, Geralt sets forth to a village, where a resident might have info pertaining to the Wild Hunt. Along the way he sees a number of bandits terrorizing a lone peasant, who jumps into action. Combat is a combination of melee and magic; Geralt is able to execute both disciples with total skill and ease.

Once more, when you get down to it, it’s nothing you haven’t seen or heard before, and yet it’s never been this pretty either. Anyhow, the victim who is saved is thankful, and the audience is told that every event, every action, has an impact later down the road. It could it be minor, it could be huge—and who knows what this act of kindness will lead towards. 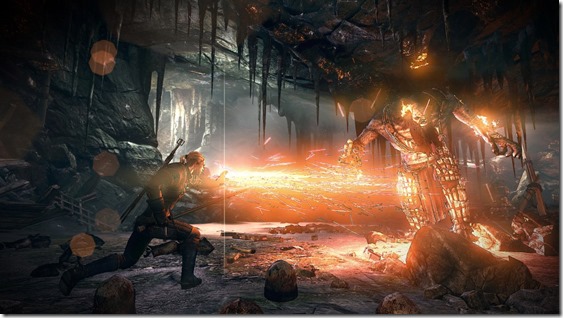 Geralt afterwards arrives at his destination, though the village is in the grips of drama. A man’s death has split the townsfolk into two halves; the elders believe it is a forest spirit of some sort that is punishing everyone for not following tradition, while the younger folk who could care less about the old ways think that it’s simply a wild beast—one that must be hunted and destroyed.

Given that Geralt is by trade a monster hunter, he decides to lend some assistance, which leads us to the forest, and the overwhelming of the senses once more—in particular, all the individual leaves and branches of every tree, swaying in the wind. Geralt is able to isolate the tracks of this beast and, with the help of bestiary, determines that said creature is an ancient beast known as the Lechen.

As it turns out, this monster shares a bond with a villager, unbeknownst to him or turn. Upon further investigation, it’s a her; the girlfriend of the most vocal member of the younger camp, in fact. And despite it being his love, this man wants to prove the elders who really runs things, and tells Geralt that if he goes to the forest to kill his town’s tormentor, its link (his gal pal) will also be snuffed out, which is essential for the Lechen threat to be completely eliminated.

The Witcher 3 is built heavily around interpersonal relations, and the player is given a variety of options during conversations, to help forge a path, a code of conduct that will again have repercussions throughout Geralt’s journey. In this case, he can try to convince the villager to spare his girlfriend, but instead, for the purpose of the demo, Geralt opts to just do what he does best, since it will also line his pockets with gold. 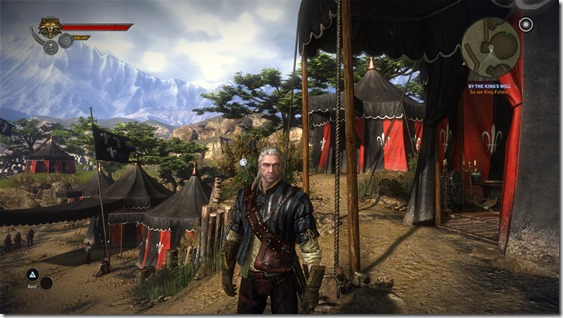 So back to the forest The Witcher goes… deep into it. Eventually, he finally comes across the Lechen itself… a tall ghastly figure, perhaps close to 15 feet in height, draped in a black cloak, whose head is a deer skull, and sporting branches for arms. Aside from being terrifying looking, it can attack by drawing tree roots from the ground, plus sending ravens towards Geralt at command. He also has familiars in the form of wolves. The battle between The Witcher and the Lechen was intense. So much so that it locked up the demo PC entirely. Hey, it’s a work-in-progress.

But after the machine was restarted and a save file employed, Geralt was able to emerge the victor. Although, upon returning to the village, instead of finding the residents all jubilant that the forest spirit has been defeated, we find many of them slaughtered. The young man that sent Geralt on his mission decided to take over the village, which meant killing all the elders that opposed him, and all their supporters. Again, The Wticher doesn’t want to be involved, though he does let the village’s new leader know what he thinks of him. It’s not so nice.

We are then treated to a cut scene… one that would normally take place later in the game, that shows how the village ultimately succumbs to hardships and eventually bandits, thanks to less-than-stellar leadership. The same point is reiterated: everything is connected, and in a small way, Geralt is partly responsible to the miserable fate that will eventually befall the village.

Man, that sure is a lot of pathos for just tiny little side mission! One of many, and who knows what lies in store with the main game? One simply cannot help but become excited by The Witcher 3, even if one normally could care less about such fare (like myself); it did more to genuinely wet one’s appetite and light one’s imagination that anything else that was on the busy E3 show-floor.