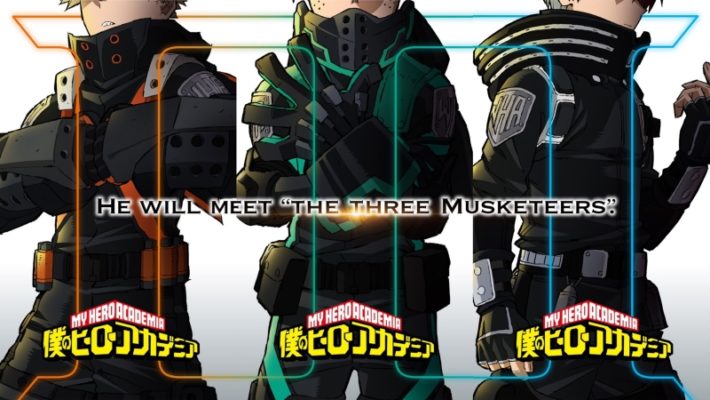 My Hero Academia Movie 3 has been announced with a Key Visual https://t.co/g1rctvd1M9 pic.twitter.com/Tjc5zW7Dub

The key visual shows Izuku Midoriya, Katsuki Bakugo, and Shoto Todoroki–three of the most prominent heroes in My Hero Academia–wearing new hero costumes. The costumes are darker and more tactical-looking versions of their regular designs, and also feature a shoulder badge emblazoned with “WHA.” On the picture is a sentence: “He will meet ‘The Three Musketeers.'”

It’s anyone’s guess what that could mean for the next My Hero Academia movie.  The series itself refers often to The Three Musketeers, a classical story by French author Alexandre Dumas, particularly the motto of its characters, “One for all, all for one.” “One for all” is the name of the power protagonist Izuku inherits from his mentor, All Might, and “All for One” is the name of a major supervillain.

Though the anime adaptation has otherwise stuck fairly closely to the original manga, the feature films have largely featured original stories. The first film, My Hero Academia: Two Heroes, focused on the bond between All Might and Izuku, while the second film, Heroes Rising, gave the interactions between Izuku and his rival Katsuki center stage. The prominent positioning of Shoto Todoroki in the 3rd position here could imply that the third film, whatever its title, is ready to establish Shoto as part of a core trio of sorts.

No other details about the third My Hero Academia film have been revealed, though the fifth season of the anime adaptation is scheduled to air in Spring 2021. A mobile game, My Hero Academia Ultra Impact, recently concluded its first closed beta test.