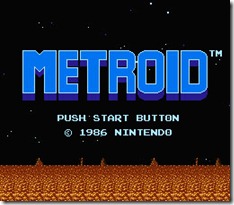 “Metroid,” in the language of Samus Aran’s adoptive race, the Chozo, means “Ultimate Warrior”. But how did the game’s designers come up with the name?

In a 2004 interview with Japanese magazine, Nintendo Dream, Nintendo’s Hiroji Kiyotake and Yoshio Sakamoto revealed how it came about.

“There was one more staff member, and the two of us decided on it,” Kiyotake told Nintendo Dream. “We attached ‘android’ to the ‘metro subway’ and that’s how we got ‘Metroid’.” Prior to this, the game was titled Space Hunter, added Yoshio Sakamoto, current director of the Metroid series.

What about Samus Aran, then? It turns out, Samus’ name is based on Edison Arantes do Nascimento, the soccer player better known as Pelé, Kiyotake revealed. “Even the name of the protagonist could be put together in this manner, and if I wanted to give someone a strange name, I could refer to Pelé’s name,” he joked.

“Kiyotake, If you check if Pelé’s real name was ‘Samus Arantes,’ that’s a little incorrect,” Sakamoto joked back. “He’s called ‘Something’ Arantes Nascimento, and only ‘Aran’ matches. (Laughs)”

Finally, Kiyotake also revealed where the name “SR388” came from. SR388 is the name of a planet formerly inhabitated by the Chozo. The entirety of Metroid II takes place on SR388, where Samus is sent to exterminate the Metroid race.

“In addition, ‘SR388,’ the planet on which the Metroids were discovered, comes from a bike engine! (Laughs)” Kiyotake revealed. “In Yamaha’s bikes, there is a series called SR400, and in those days, while it was called 400cc, you didn’t have any choice but 388cc, but it was written like that for the time being, and that’s how it came out! (Laughs)”

You can find all these quotes and much, much more relating to the early days of Nintendo game development on the Famicom Disk System over at the Metroid Database, where the staff have transcribed the first half of the 2004 Nintendo Dream interview. It’s a fascinating glimpse into development history, especially if you’re a fan of Metroid and Kid Icarus.