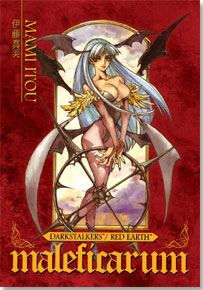 While you may not be seeing a new Darkstalkers game for a while, if you’re willing to settle for manga instead instead, Udon have you covered.

The company, best known for publishing art books based on Capcom games, is publishing a oneshot titled Darkstalkers / Red Earth: Maleficarum, slated for release October 13th. It contains five stories spanning the Darkstalkers universe and another four set in the Red Earth world.

As for the latest on any sort of potential Darkstalkers game…go-to Capcom fighting game producer, Yoshinori Ono, is still in the process of drumming up enough support to appease the higher-ups at the company, with his latest tweet on the subject stating, “D.S. is very difficult.I have many enemy for D.S. in CAPCOM.”