The major problem with looking at the worth of a compilation like World Heroes Anthology is that sometimes the collection itself has more value than the games on their own.  Rather than most classic game compilations, this one showcases the history of a series rather than forcing the company in question to pick and choose which titles would be mix best.  Since I’m one of those gamers that loves to play games in the order that they were developed by a certain team or company, WHA is a great title for me to see what ideas a series went through until a more or less final product.  For this article, I’ve chosen one standout game from the compilation and I’ll explain why I think its worth playing in context of the others. 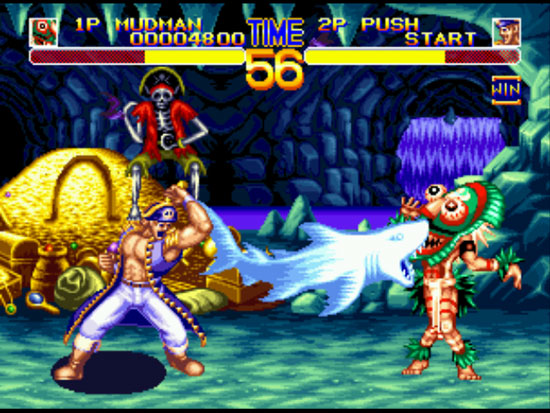 World Heroes 2 is quite possibly my favorite in the series.  It doesn’t play as well as World Heroes 2 Jet or World Heroes Perfect but I find that it’s both the most unique and best representation of the series as a whole.  If any of you have played the first one, you’d probably just give up on the series.  It was clunky even among early 2D fighters (!!!!!) and the gameplay really didn’t stick out.  It had two things going for it, though.  The first was its personality.  The game had a really great sense of humor that MVS games like Aero Fighters 2 were known for at the time.  The story was outrageous (it’s about a bunch of fighters from across time assembled to kick each others’ asses on the behalf of a scientist with a time machine) and the historically-based characters quipping with Engrish banter.  The other unique factor was its wrestling motif.  The controls consist of a punch, kick, and GRAB button, the third being a highly unusual command for a lone button at the time.  Furthermore, the game had a Death Match mode where the level you fought in would have hazards (including electrified ropes bordering a wrestling right) that would affect how you needed to play in order to avoid damage and fight effectively.

The second game takes these two unique factors and runs with them.  The quotes in-between matches are priceless and even more characters from all over our world’s history are added to the mix.  The wrestling elements introduced in the first one are still here and added some extra factors to strengthen the motif.  The Death Match levels are more varied and more hazardous, not unlike many of the fighting arenas we see today in the Super Smash Bros. series.  The most unique aspect about this game that I loved was the tug of war style life bar.  Instead of each fighter having their own individual life bars, they have one big bar with a marker that moves back and forth when the characters get hit.  When the marker moves all of the way to the right or left, the character gets knocked down.  This style of life bar adds a lot of excitement to the game because it adds the factor of back and forth comebacks to the game.  At any point, a player that’s almost knocked down can get in a couple good combos and place the marker back in the middle where the match started.  After they’re knocked down, the player then gets a chance to get up Punch Out!! style by wiggling the joystick and mashing buttons, desperately trying to wake up their character (and ravaging their poor controllers) before the ominous countdown reaches 10.  These two factors really add to the wrestling feel of the game and they are something you don’t normally find in a fighting game, today or yesteryear. 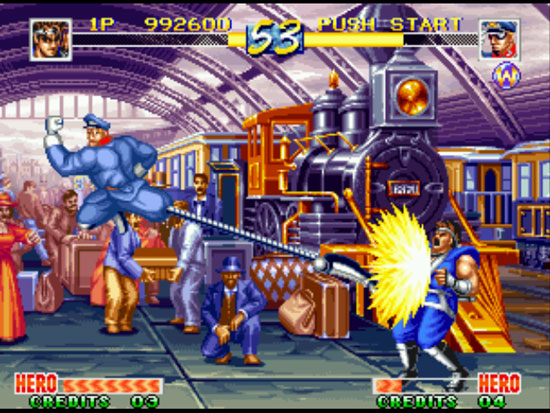 The later games in the series are definitely worth playing in terms of them actually being competent fighters.  They are quick and have modern combo systems.  They are fun and still hilarious (where else can you have a modern American football player fight a legendary Japanese ninja?).  However, they ditch the wrestling aspect almost entirely by taking out the Death Match and the grab button, which is what I thought made the series stand out among other 2D fighters.  Personally, I think the second game is worth the price (still $15 USD thanks to SNK Playmore’s amazing current strategy) if only to see some variation in the genre that really got overlooked and it would be tough to see how cool this game is outside of series.