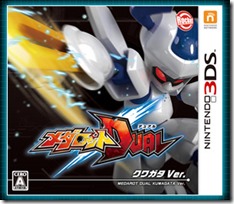 Medabots has seen a couple of Nintendo 3DS games, but no one appears interested in localizing them for the west… including Xseed, who have a reputation for picking up some of the unlikeliest candidates for localization.

On Xseed’s Facebook page (via: GoNintendo), a fan asked if Xseed are interested in localizing Medabots: Dual. An Xseed representative replied, “Sorry, but not likely.”

They elaborated, “We don’t have anyone here familiar with that series, so without an in-house ‘cheerleader’ stubbornly withholding the office Dragonball-themed cookies until everyone else caves, the series will never be put up to a vote, much less approved.”

Medabots: Dual was announced earlier this year in Famitsu magazine. As per usual, the game comes in Kabuto and Kuwagata versions, and is in development for 3DS.