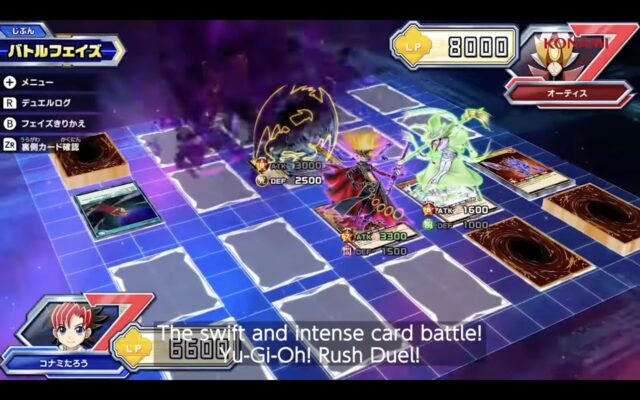 During Konami’s Yu-Gi-Oh Digital Next, the company announced two new installments that could go anywhere. One is Yu-Gi-Oh Cross Duel for Android and Apple iOS devices. The other is Yu-Gi-Oh Rush Duel, an entirely new entry for the Nintendo Switch.

As the name suggests, the Switch version of Yu-Gi-Oh uses the Rush Duel mechanic from Yu-Gi-Oh Sevens. This is similar to the Speed Duel rules. Its story will also be based upon that anime adaptation.

With Yu-Gi-Oh Cross Duel, the focus is on playing with more people. Up to four people can play the game at once. The official rule set used for this game wasn’t mentioned in the announcement, however.

Here’s the full Yu-Gi-Oh Digital Next. Things started off right away with Rush Duel. At the eight minute mark, Cross Duel had its moment. The other segments talked about ARC-V heading to Duel Links and the new Master Duel game.

Yu-Gi-Oh Rush Duel will come to the Nintendo Switch in the Americas and Europe in Fall 2021, and it will come to Japan on August 12, 2021. Yu-Gi-Oh Cross Duel will come to Android and Apple iOS devices worldwide. Konami announced the multiplatform Yu-Gi-Oh Master Duel at the event too.