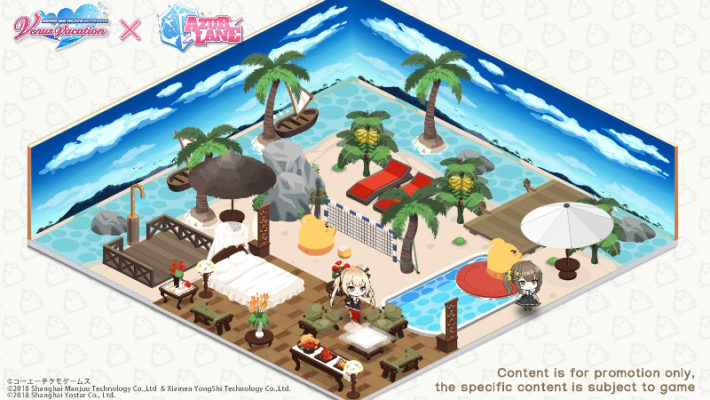 Yostar revealed a limited Azur Lane dorm furniture set based on the collaboration with Dead or Alive Xtreme: Venus Vacation. It casually confirmed that Marie Rose is the second character from the series to join the mobile game event.

Marie Rose has been a very popular character in the Dead or Alive franchise ever since she made her debut in Dead or Alive 5 Ultimate: Arcade. She is often included in the character roster during collaborations with other games, such as Senran Kagura and Alice Gear Aegis. So it is hardly surprising to see her making the cut into the Azur Lane event roster.

Most of the Dead or Alive Xtreme dorm furniture items will be available to purchase with Decor Tokens. The Japanese official account noted, however, that two of the items from the set—the Southern Beach Volley and the Leisure Pool—will be only purchasable by using Diamonds.

A limited furniture set will be available on 11/26!

Previously on November 16, 2020, Koei Tecmo revealed through the Dead or Alive Xtreme: Venus Vacation 3rd Anniversary stream that the first character confirmed to join the collaboration event was Misaki, who will be assigned a Light Cruiser rigging in the mobile naval battle game. This collaboration was first teased at the Azur Lane English 2nd Anniversary stream in August 2020.