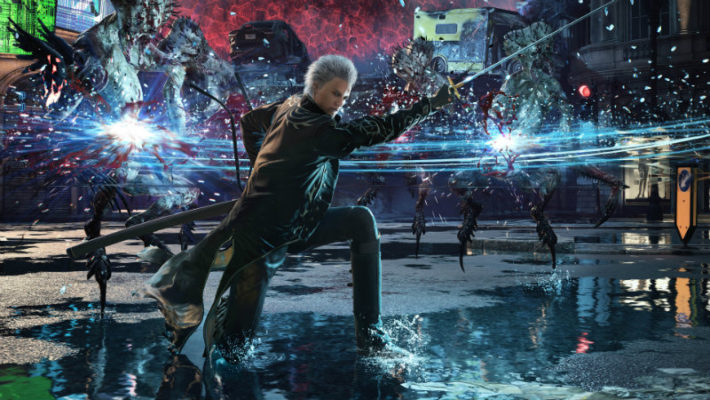 Dante, Niero, Vergil, and V are about to return. Devil May Cry 5 Special Edition is poised to welcome people to the PlayStation 5 and Xbox Series X this month. Ahead of the debut, Siliconera got in touch with Producer Matt Walker once again to discuss this entry in the series, what’s going on with Vergil, and if we’ll ever see a localization of extra materials like Before the Nightmare.

Matt Walker, Capcom: Your intuition is right on the money! Making that comparison to DMC3SE and DMC4SE should give players a good understanding of exactly what to expect for DMC5SE. 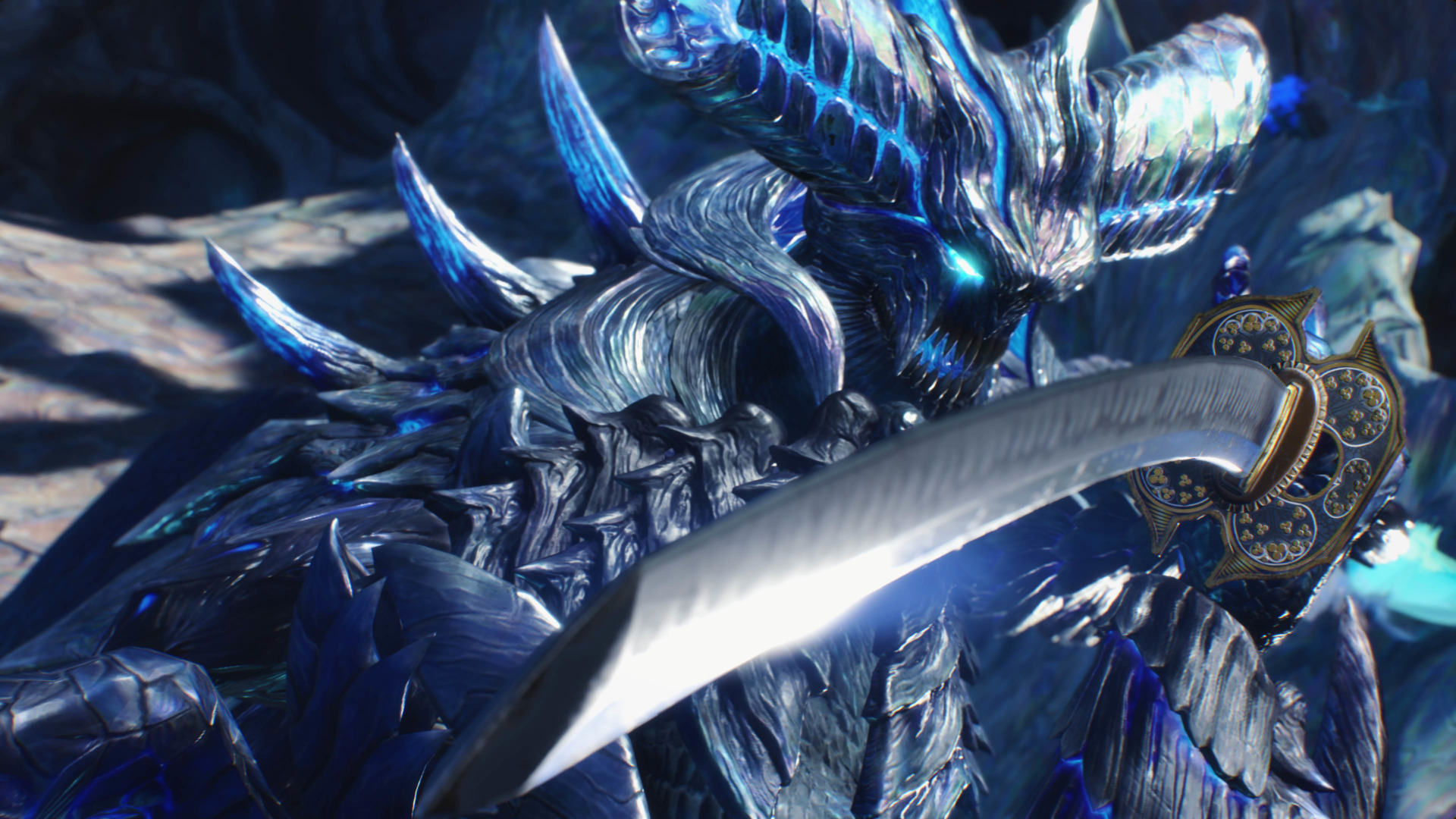 Benjamin Maltbie, Siliconera: Devil May Cry 4 Special Edition added a concentration style which had a focus meter that charged by dodging and attacking, whereas running and taking hits depleted the meter. This helped set Vergil apart, and imbued his play style with a personality fitting of the character. Will it be making a return? Or will we see new meters and styles of play?

Walker: The Concentration gauge, and all of the gameplay nuances surrounding it are indeed back for DMC5SE. We’ve also tuned it so that it’s a bit easier to gain concentration this time around–including a new Trick Dodge. Vergil experts will have even more depth to explore with Vergil’s Judgment Cut End, Hell on Earth and his Deep Stinger. We’ve even added something that will help out beginners as well…

Hashimoto: In the trailer for Devil May Cry 5 Special Edition, we saw a brief segment where Vergil used the Yamato to separate himself from V–will V function as a summon in this scenario? Or will that activate a set period of time players will be able to control V?

Walker: That is precisely what I was just alluding to! Vergil now has a move called “World of V” that can be activated when he has enough concentration. When this is executed, Vergil separates himself from V with the Yamato, and V appears to summon Shadow, Griffon and Nightmare for a massively damaging area of effect attack–and when enemies are defeated by this attack they’re more likely to drop green orbs. So specifically to your question–it’s more of a summon. 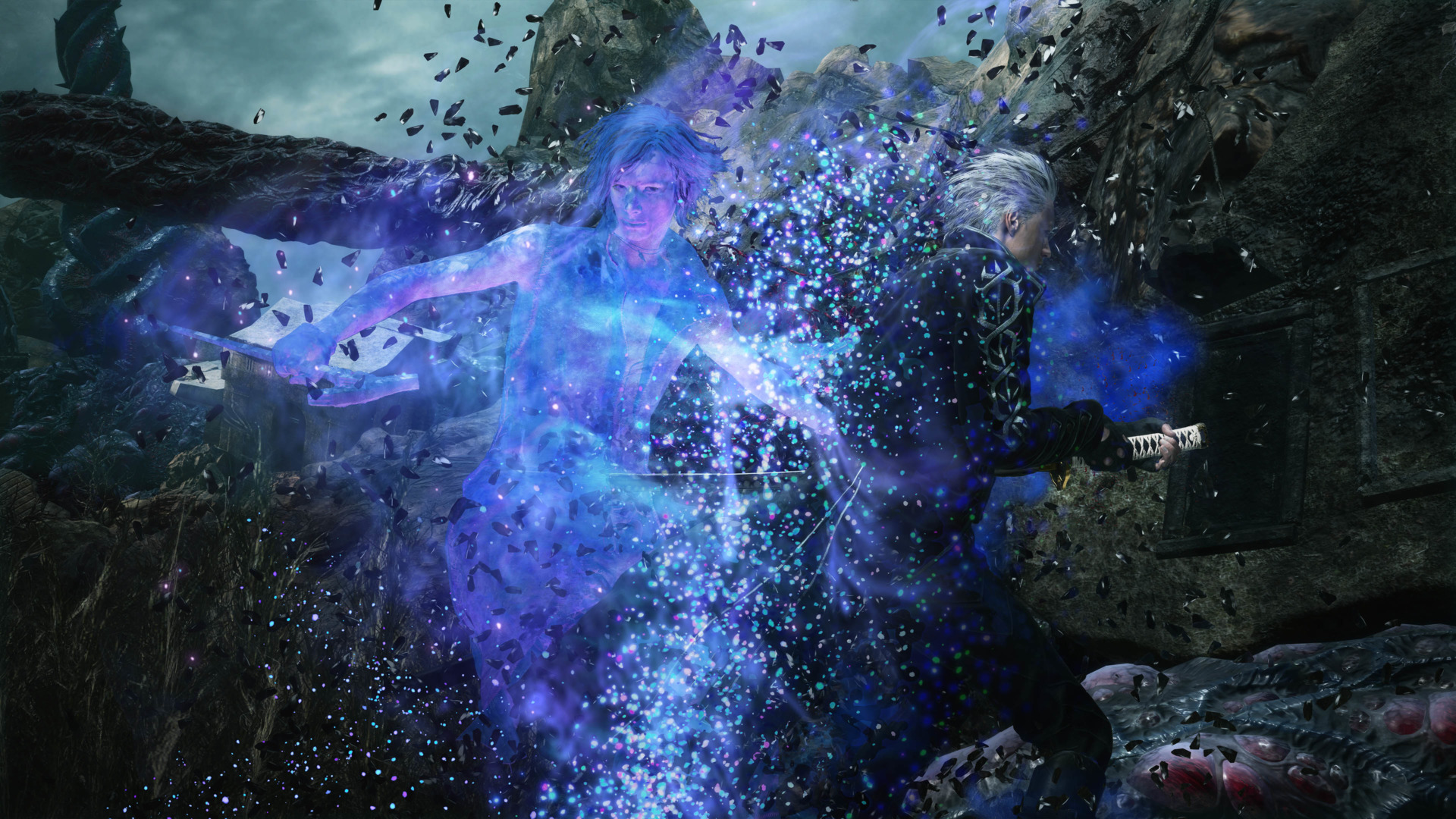 Walker: In addition to Yamato, Vergil does indeed still have Beowulf. In DMC canon, Force Edge eventually awakens to become the Devil Sword Sparda. Since Vergil doesn’t have this in his possession, he uses his demon power similar to the way he summons his Mirage Blades to summon a “Mirage Edge” that he can use for melee combat. You’ll also find with all 3 melee weapons that Vergil has some amazing added combo finishers when he’s transformed into his Sin Majin form.

Maltbie: Will it be possible to fight Dante and Nero as Vergil?

Walker: I don’t want to spoil anything, but similar to DMC3SE and DMC4SE, you are indeed playing the game from Vergil’s point of view! 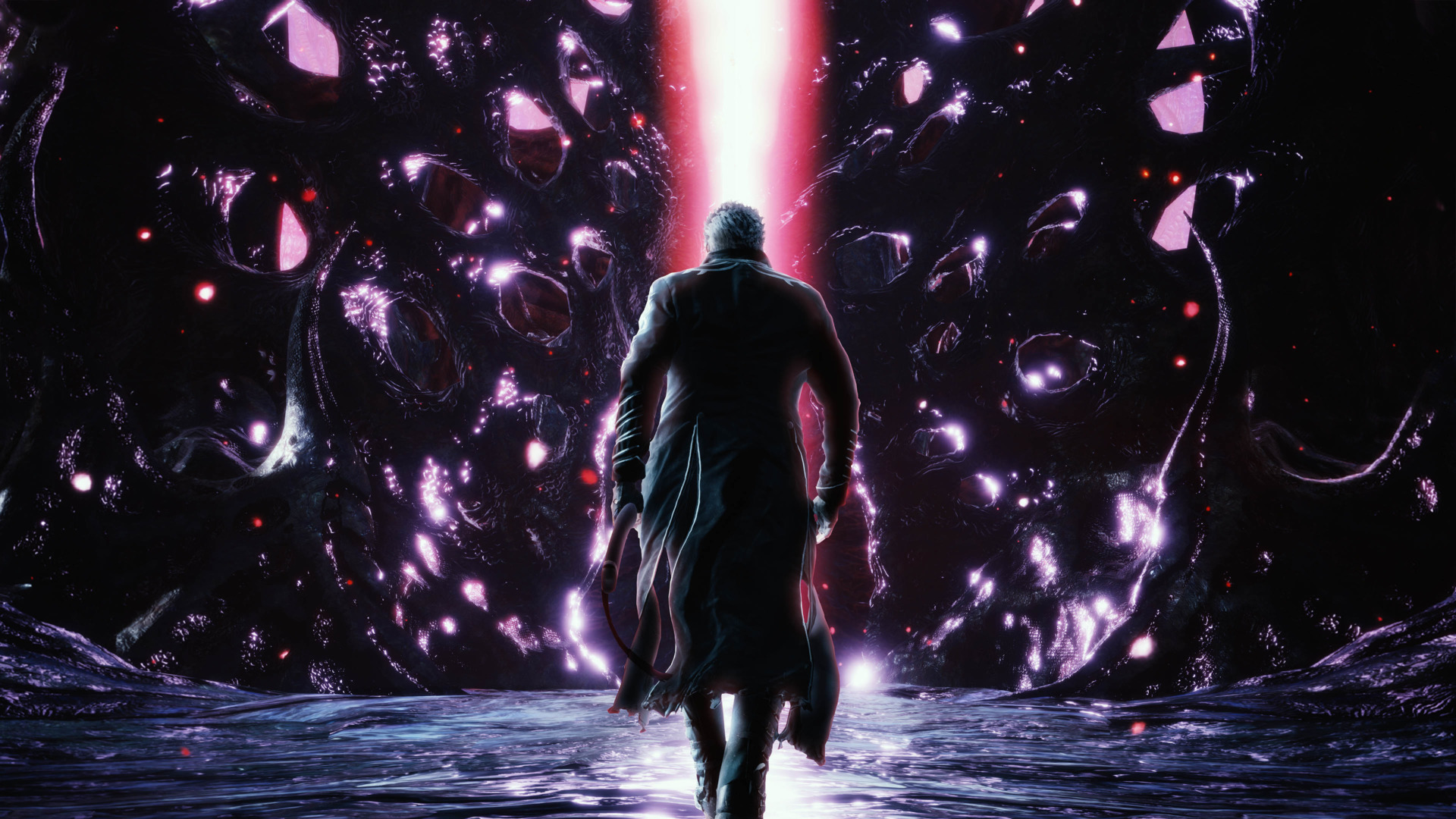 Maltbie: Data miners found files hidden in the game months after the original’s release and pieced together a mod where they could play as Vergil. The character’s inclusion in past Special Editions had set up a bit of an expectation that he’d be available this time around, too. How long has the team been planning Vergil’s mode and moveset, and how do you keep the character feeling fresh from game to game?

Walker: We started planning Vergil’s moves and how Vergil Mode would play in earnest when we started looking into making DMC5SE, which was after DMC5 was released. To be completely honest, what modders found was remnants of a system used during development to test out Vergil’s moves as a boss in the game. More so than even the other bosses, we were very particular about Vergil, given his importance to the series.

You can see this in Vergil’s Concentration mechanic, how his Sin Majin form offers differing gameplay from Dante, and in the new elements we’ve built in such as his Devil Trigger summoning his doppleganger or the new “World of V” move. 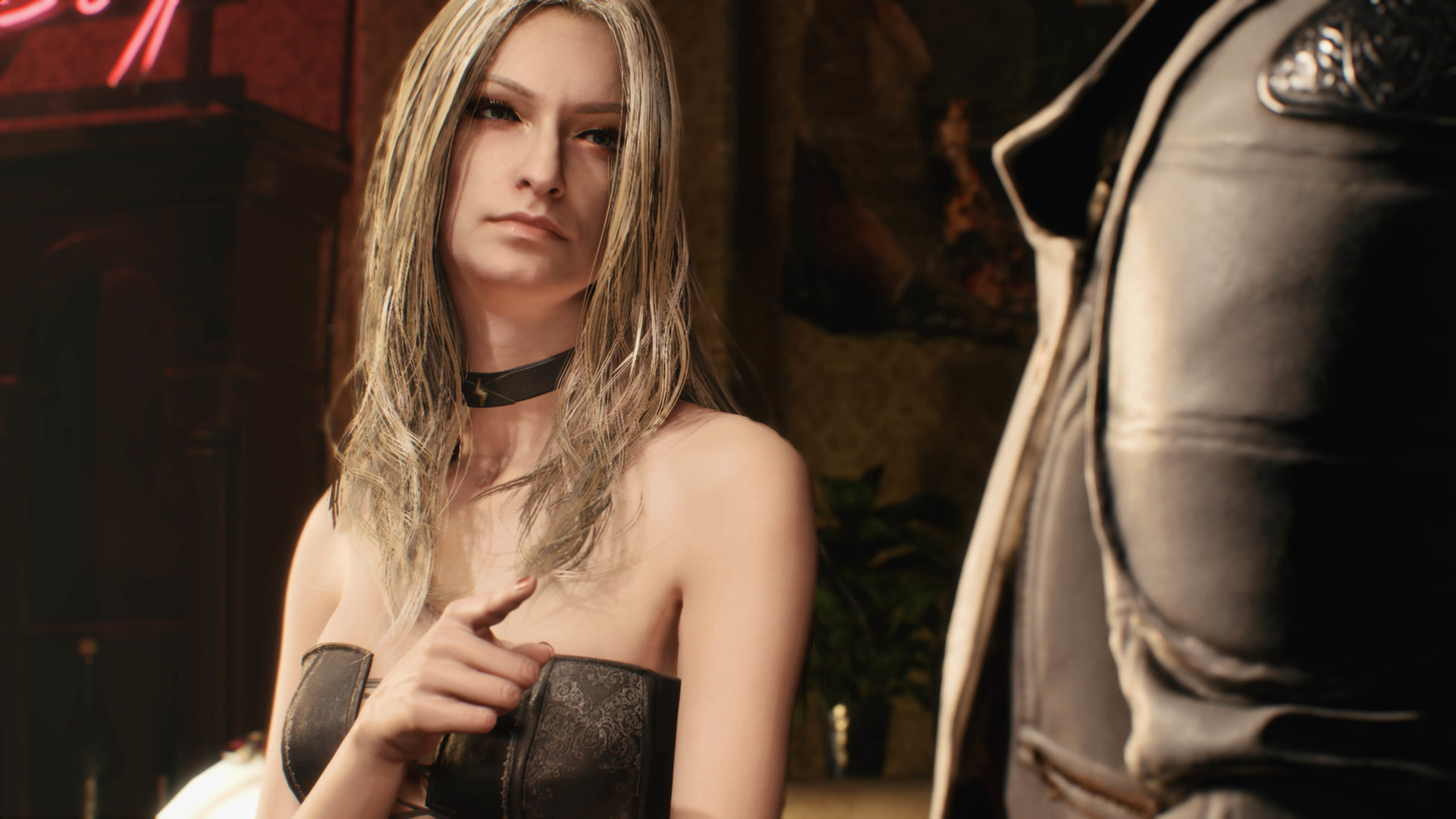 Maltbie: Since Vergil is a direct part of the story in V, is this more of a non-canon feature or has any work been done to weave him in?

Walker: You can consider the new V move a way of us saying that V has not disappeared into the ether–that he’s a part of Vergil.

Maltbie: A lot of longtime fans had issues with Lady and Trish’s roles in the story–i.e., the heroines not being playable—what happened there and what’s the response to that criticism?

Walker:As a fan of Lady and Trish (especially Lady), my response would be that I understand the disappointment from folks wishing they were more in the forefront of DMC5. Since our focus was on exorcising the Sparda family’s demons for DMC5, they took a backseat in order for us to concentrate our time and effort on creating unique and compelling gameplay for Nero, Dante and V. As the female characters are still a vital part of DMC though, we did go through the effort of casting, creating costumes and scanning models to create them in the realistic graphical style  of DMC5. We really do hope fans enjoyed the scenes we were able to make, and we appreciate the ongoing discussions within the community about the series’ female characters.

Maltbie: Will any trans-media materials, such as the Before the Nightmare novel, have a chance at being localized? Especially now that light novels are more popular in English-speaking regions?

Walker: Personally I’d love to see localizations of media like Before the Nightmare! Those are all licensing items that we cooperate on, but are not directly responsible for, so it’s not my call, but we’re always curious to hear what our fans want from the DMC universe.