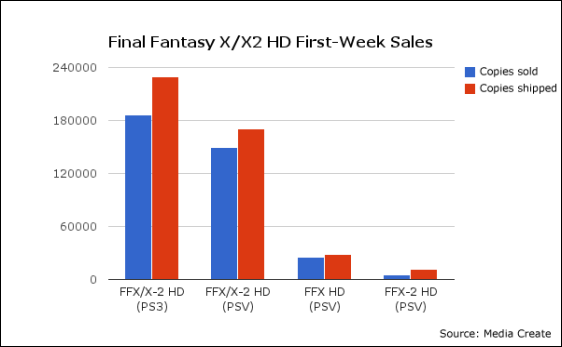 Final Fantasy X/X-2 HD Remaster was released in Japan on December 26th, 2013 for the PlayStation 3 and PlayStation Vita in Japan. As previously reported, the PS3 version sold 185,918 copies while the Vita Twin Pack version sold another 149,132 copies.

Meanwhile, Final Fantasy X-2 HD was understandably a little less popular, being a sequel. Only 5,357 people bought that game in its week of release,and that amounted to a mere 46.64% sell-through of all copies shipped. By week 2, total sales of Final Fantasy X-2 had reached 16,355, selling through 84.12% of its shipment.

Not too shabby a performance at all on all fronts, but it should be interesting to see how the games sell in their third week on store shelves, given the large drop-off in week 2. That information will be available this Wednesday as per usual.