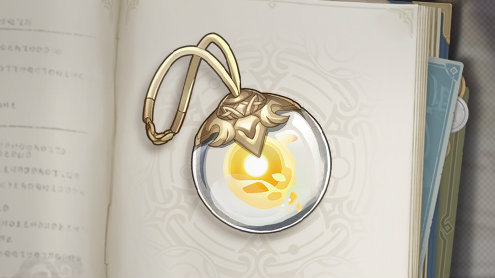 We didn’t just learn more about Ganyu last night. miHoYo revealed a Genshin Impact Seelie event. Though this time, you won’t be following one around while fighting enemies in the Dragonspine area, like we did during The Chalk Prince and the Dragon event. Rather, you’ll be completing tasks to earn a Genshin Impact Mini Seelie gadget for your character starting on January 8, 2021.

Here’s how it works. When you participate in Lost Riches, you’ll follow around a special Treasure-Seeking Seelie. Like usual, it’s an ethereal spirit that will lead you around the world before stopping at a point of interest and revealing treasure. In this case, you’ll be collecting clues for special treasures that involve Primogems and Iron Coins for the event shop.

The event shop will have three Mini Seelie gadgets for Iron Coins. (It’s unknown if it will include other items, such as Hero’s Wit and Mora, like other event shops.) You can pick a Curcuma (yellow), Dayflower (blue), or Rosé (red) Mini Seelie gadget if you collect enough. You can only pick one and, once you do, you get a decorative Seelie.

Genshin Impact is available for the PlayStation 4, PC, and both Android and Apple iOS devices. It will also appear on the Nintendo Switch. People can participate in the Genshin Impact Treasure-Seeking Seelie event between January 8-18, 2021 if they completed “The Outlander Who Caught the Wind” Prologue quest and reached Adventure Rank 20.