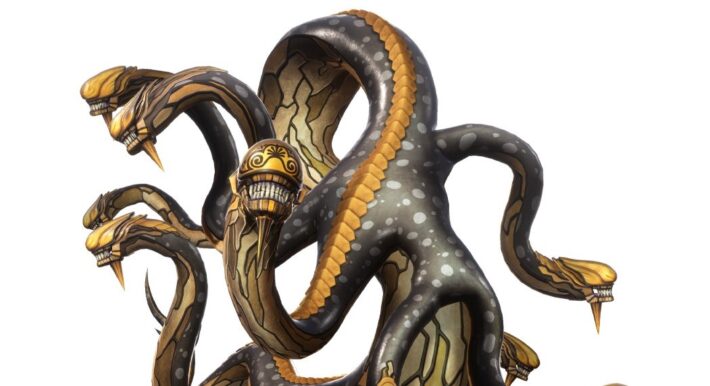 Shin Megami Tensei V Character Designer Masayuki Doi is back for another demon commentary entry. The latest in-depth installment posted to Twitter gave people more information about Hydra, a demon that made its first appearance back in 1987’s Megami Tensei for the Famicom. Doi noted that while Hydra is a well-known monster from Greek mythology, he wanted to give the character a unique appearance to make it fit the SMT universe.

Paying homage to the Hydra’s Greek heritage, the team decided to use a design with symbols and patterns reminiscent of those seen on ancient Greek pottery. Doi also mentioned the most recent Shin Megami Tensei V trailer and stated that the game features a good number of cutscenes and battle animations that took a large amount of effort to create.

Like Lahmu from last time, we’ll be sharing both its retouched artwork and pre-development design files, as Hydra was also a demon we originally were not planning to color for marketing purposes.

Hydra, as you all know, is a monster that appears in Greek mythology, and it’s pretty well known in general. He’s a giant serpent said to have 9 heads, all of which are rabled to be immortal and laden with poisonous fangs. Because Hydra is a major creature in mythology, he’s naturally been visualized in works of art since time immemorial, but for this game, we decided to give our own unique twist to his appearance so that the design would feel like it belongs in the SMT universe.

Firstly, in terms of overall direction, we didn’t want to simply make him look cool. Rather, we wanted to differentiate from the existing iterations depicted in other works. We ultimately decided to go with a design that heavily uses many graphic symbols and patterns, reminiscent of those painted on ancient Greek pterry, and we referenced many visual and historical artworks to achieve that.

There’s a rich history around ancient Greek pottery, especially with the many beautiful patterns and iconographies found in the red and black figure pieces, and we feel this style adds a lot of depth to Hydra’s design. There have also been many ceramic artifacts that depicted the Hydra itself, so we decided to incorporate the most classic designs into its head and body.

According to the myths, there’s a fairly prevalent idea that Hydra would often blindly ransack villages, so, with this in mind, we decided to make his face look like a sort of eyeless mask, and less animal-like. We believe that doing so helped to give the impression that this is a monster that thrashes about impulsively, rather than through intellect.

Those who already saw PV02 may also have noticed this, but to further amplify his menacing presence, we also made him hungrily drool in the game, and all while spreading his poisonous gas. There’s a good number of cutscenes and battle animations that we all rather meticulously worked to create, so I hope you look forward to your encounter with Hydra once the game releases!

Shin Megami Tensei V is scheduled to release on the Nintendo Switch in Japan on November 11, 2021, and worldwide on November 12, 2021.