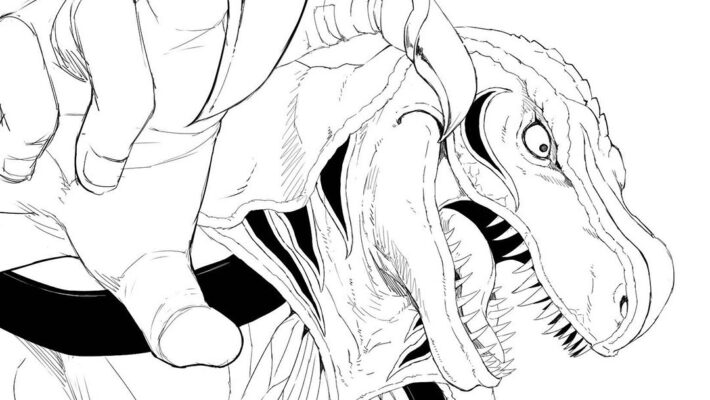 Character Designer Tomohiro Nakata offered insight on the newest fighter revealed for The King of Fighters XV. When King of Dinosaurs makes his KOF XV debut, he’ll know some new moves. When sharing a piece of concept art for the character, Nakata confirmed there will be new attacks, but didn’t name any of them. He did, however, confirm Ankylo Hammer will be back.

Nakata also talked about a KOF XV King of Dinosaurs adjustment. When people use him in the game, they’ll be able to change their mind if an attack isn’t working out as planned. He noted people can “cancel out of special moves.”

Feel the overwhelming might and destruction of a dinosaur on the loose personified in this (somewhat) mysterious heel wrestler!

We’ve added additional moves to give his combos a real kick. Make your opponents cower in fear by combing into Ankylo for that extra damage.

What’s more, he’s been carefully adjusted to now be able to cancel out of special moves, giving you the player way more options in battle.

All you dinosaur fans out there in the world, get ready—because King of Dinosaurs is on the attack!

Nakata often uses these statements to talk about design choices for characters in KOF XV. For example, he talked about the motion capture for Ramon.

The King of Fighters XV will come to the PS4, PS5, Xbox Series X, and PC via Steam and Epic Games Store in Q1 2022. King of Dinosaurs was the 25th character revealed for the KOF XV.