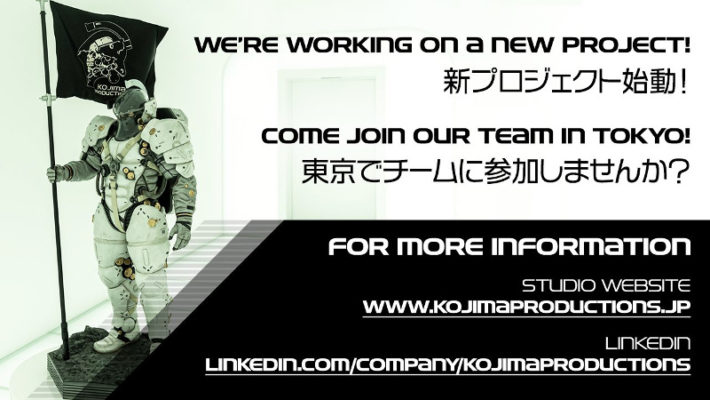 Kojima Productions has opened new job positions while confirming that the Japanese studio is currently working on a new project. Although the applications are open worldwide, all applicants are expected to be fluent in Japanese as they will work directly with Hideo Kojima’s team at the group’s office in Tokyo, Japan.

The job list is available on the Kojima Productions website and LinkedIn page. At the time of this writing, there are 25 job openings available on the page. The positions range from programmers, artists, designers, writers, project managers, producers, to localization staff.

#KojimaProductions confirms a new project is in development and is looking to hire the best-in-class talent to work out of our Tokyo studio. For more information on the openings and requirements, please visit our website at https://t.co/jeTGnnwLAW pic.twitter.com/StLOrxTlhg

Kojima Productions previously worked on Death Stranding, which is now available worldwide on PlayStation 4 as well as PC. In an interview posted in May 2020, Hideo Kojima noted that the game’s sales had successfully covered the development costs while also giving some hints on his upcoming new project.