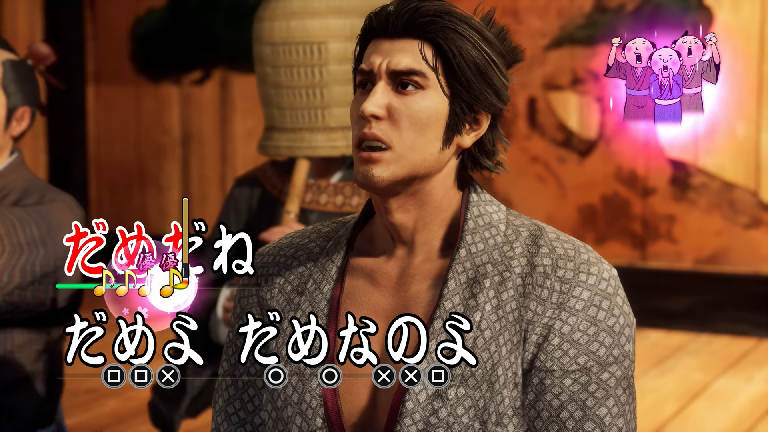 RGG Studio’s newest trailer for the Like a Dragon historical spin-off, Like a Dragon: Ishin, shows off some Bakumatsu-era minigames you can indulge in. It also introduces the different combat styles Ryoma can use upon his enemies. The first full-length trailer for the game focused on the story and characters, whereas this one is mostly on the gameplay mechanics.

The four different styles are Sword, Gun, Fists, and Wild Dance. The Wild Dance stance will let Ryoma rampage around the battlefield with both his sword and gun. Ryoma can also customize his weapons himself. One of his upgrades is to apply fire damage to his swords. This is in contrast to protagonists from the mainline Like a Dragon series. They usually had to seek the help of NPCs to upgrade their equipment.

You will also be able to “hire” legacy characters from the Like a Dragon series as assists. Examples include Kasuga, Makoto Makimura, Mame, and a bear. Equipping their cards will allow Ryoma to use their skills, or even summon them in combat.

Substories in the series are famous for their general bizarre characters, and the trailer introduces a few of them. There even appears to be a Bakumatsu counterpart to Yakuza 0‘s Bacchus mingled in. As for minigames in Like a Dragon: Ishin, you will be able to indulge in cooking, karuta, chicken races, fishing, karaoke, and more.