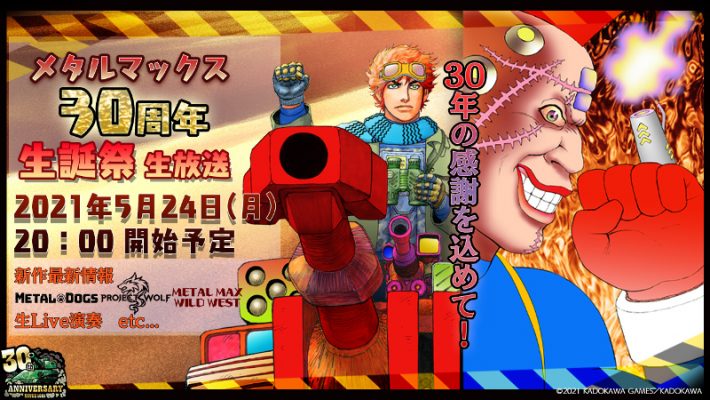 Kadokawa Games revealed details about the Metal Max 30th Anniversary live streams. The Japanese game company will hold two separate streams on May 23 and 24, 2021. [Thanks, 4Gamer!]

The actual anniversary stream will go live on May 24, 2021, at 20:00 JST (4am PT/7am ET). This main show will reveal more details about three upcoming titles in the franchise. The first one is Metal Max Wild West, an RPG previously known as Metal Max Xeno Reborn 2 that will be available on PlayStation 4 and Nintendo Switch in 2021. The story in Wild West will take place a few years after Metal Max Xeno Reborn.

The second game that Kadokawa will show in the anniversary stream is Metal Dogs. This is a rogue-lite action game where you play as Metal Max Xeno Reborn‘s mascot dog Pochi. It will be available on PC via Steam. The development team from 24Frame will first release an Early Access version in Japanese. It promised to add English language support by the full release.

Finally, the stream will also unveil new information on Project Wolf, a new title in the Metal Saga series. This title is currently under development by Success Corp, which started the sub-series by releasing the Metal Saga RPG for PlayStation 2 in 2005. As of this writing, the release window and platforms for Project Wolf have yet to be announced.

The latest title in the franchise released to date is Metal Max Xeno Reborn, which came out for the PlayStation 4 and Nintendo Switch in Japan in September 2020. Reborn is a remake of the 2018 title Metal Max Xeno. NIS America released an English localization of the original Xeno in North America and Europe for the PlayStation 4 in September 2018.