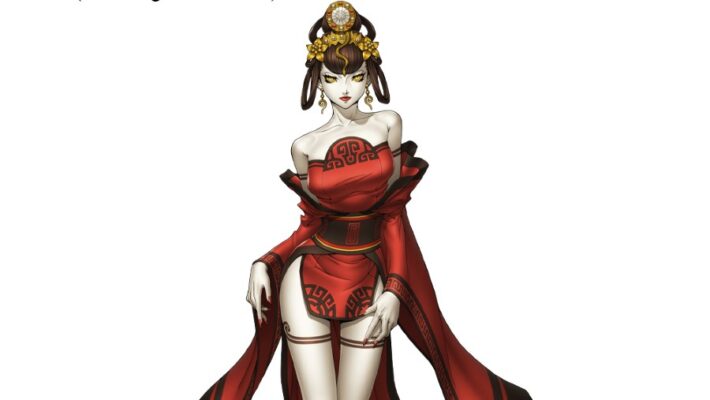 The latest Shin Megami Tensei V character commentary from Character Designer Masayuki Doi doesn’t talk about any ordinary demon. Rather, it focuses on someone who will be a major NPC in the game. He discusses the design choices behind Nuwa, a demon working with Shohei Yakumo.

Doi begins by explaining how the traditional version of Nuwa would look. In Chinese mythology, she has more snake-like features. He then explains that since Nuwa looks more human in SMT V, the goal was to represent her background through her outfit and design with Chinese and serpentine elements.

During the development process, we actually used to tape the concept art for all the characters and demons on our studio wall to give everyone visibility on the designs. As a result, we’d often receive feedback from people passing by, but Nuwa was always consistently one of the most popular demons in the office.

Nuwa is a goddess originating from ancient Chinese mythology, and is said to be the creator of humanity. She’s often described as “having a human head with a serpentine body” and is commonly depicted as a human whose lower half is that of a snake. In some instances, however, she’s depicted simply as a snake with a human head, a zany but more literal way to imagine her appearance.

This game necessitated Nuwa’s design to look more human, but her true nature is…… something we teased in our latest trailer we revealed the other day, which I highly recommend checking out if you’re interested!

Because we didn’t go with an appearance that strictly adheres to her canonical description, we instead opted to incorporate elements of ancient Chinese civilizations in her design to strength the sense of her mythological origin. We referenced things like ancient Chinese bronzeware, decorative accessories with precious metals, and the Chinese “hanfu” – though, technically those are from a much different time period, historically. Of course, it wouldn’t truly be a “Nuwa” design if we didn’t weave in serpentine features, so we decided to represent that part of her identity through her hair ornaments, the pattern on her clothing, and finally, with her slit-shaped pupils.

To further give an alluring, demonic air to her, I paid special attention to her skin rendering, popping out her bones around her joints. Coloring her was a very fun process because of that.

During the story, Nuwa and Yakumo will appear several times before the protagonist. I won’t say anything further to avoid any spoilers, but people in the office absolutely love her demeanor and behavior, some even saying she’s almost like a protagonist herself. I hope players will keep an eye on these two as well.

In the past, Doi also talked about Amanozako and Jack Frost.