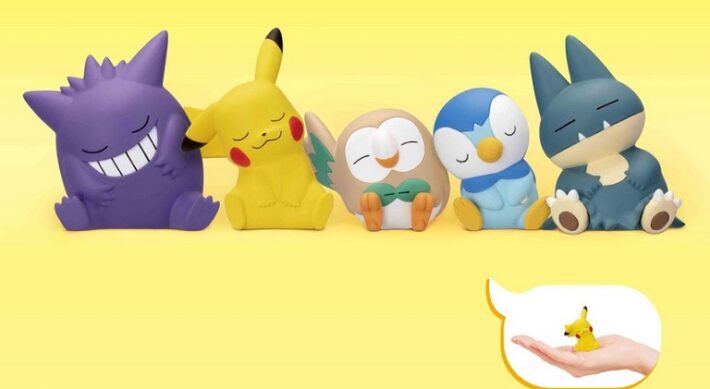 Takara Tomy will release five miniature Pokemon figures that look like they are drifting off to sleep. The “Shoulder Nap” series appeared in Japanese capsule toy vending machines from mid-July, with each spin costing 300 JPY. The five Pokemon that will appear as miniature figures are Gengar, Pikachu, Rowlet, Piplup, and Munchlax. [Thanks, Famitsu!]

Each Pokemon is so small that they can easily rest in the palm of your hand. They stand at around 39 to 55 centimeters tall. By itself, the figure looks like it is simply drifting off to sleep. However, if you place them next to each other, it gives off the impression that they are taking a nap while using their friend as a pillow.

Takara Tomy is obviously not the only company that releases capsule toys of Pokemon. The Pokemon Company also has some new Pokemon gacha figures that visitors can try for at Japanese Pokemon Center stores. Earlier this month, Pikachu, Riolu, Slowpoke, Marshtomp, Eiscue, and Ball Guy appeared as obtainable toys.

Pokemon Unite recently launched on the Nintendo Switch on July 21, 2021. If players log in at least once prior to August 31, 2021, they can claim a free Zeraora. You can also get more Pokemon for free through log-in events and finishing the tutorial. Pokemon Unite will appear on mobile devices in September 2021.

The “Shoulder Nap” series of Pokemon capsule toys from Takara Tomy are available from gachapon machines in Japan.