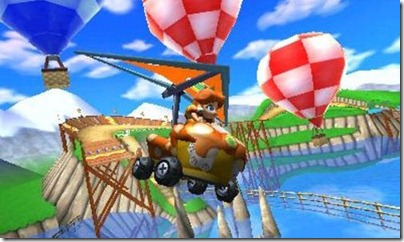 Mario Kart 7 was last week’s sales behemoth in Japan. Famitsu publisher, Enterbrain, reported sales numbers of their own earlier in the week, and Media-Create’s figures aren’t too far off from those. Mario Kart 7 sold 423,600 copies during the week, coming in at the #1 spot, and pulled sales of Nintendo 3DS systems up with it. This also resulted in a boost for Super Mario 3D Land.

At #2 was Mobile Suit Gundam: Extreme Vs., with impressive numbers of its own, at close to 350,000 copies sold. In fact, the majority of the top-20 chart for the week was comprised of Nintendo and Namco Bandai titles.

Other new releases like Fortune Street, The King of Fighters XIII and Tekken Hybrid were lower on the ladder. Additionally, both The Legend of Zelda: Skyward Sword and 7th Dragon 2020 suffered drastic drops from their release numbers the week prior. Finally, both Ni no Kuni: Wrath of the White Witch and Final Fantasy Type-0 weren’t on the top-20 chart for the week.