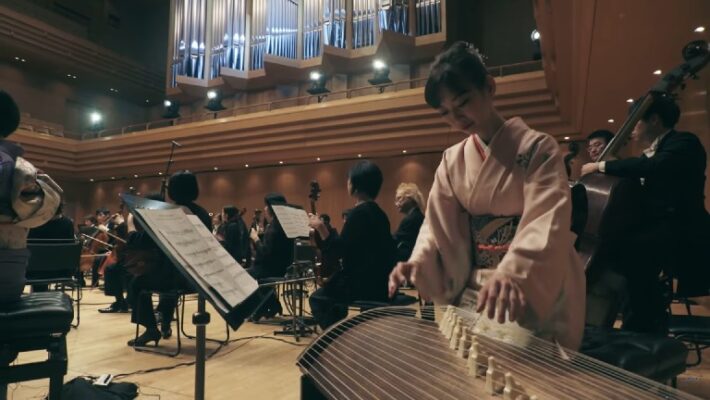 miHoYo has posted a live symphony performance of the Tokyo Philharmonic Orchestra and Japan’s top folk musicians playing two pieces from the Genshin Impact Inazuma region. The video sits at around ten minutes long and features four traditional Japanese instruments: the koto, the shakuhachi, the shamisen, and the taiko. You can watch the Realm of Tranquil Eternity live symphony performance from Twitter and YouTube.

All of the Teyvat regions in Genshin Impact draw inspiration from a real-life country. In Inazuma’s case, miHoYo took elements of sakoku-era Japan. The usage of folk instruments such as the koto and shamisen create a unique sound that distinctly separates Inazuma from other areas such as Mondstadt. It used traditional Chinese instruments for Liyue, which is based off of China. This created a similar effect to immediately differentiate the region for players. The composer, Yu-Peng Chen, carried over the battle motif from Mondstadt and applied it to “Overlord of the Thunderstorm.” This is meant to create a sense of unity as you play the game.

Almost a year ago, miHoYo released a similar video to the Genshin Impact Inazuma live symphony for Liyue. “Producing the Sounds of Liyue” shows how they recorded the soundtrack in a concert hall. The Shanghai Symphony Orchestra and Chinese folk musicians performed for that video.

Genshin Impact is readily available on mobile devices, PlayStation 4, PlayStation 5, and PC. A Nintendo Switch version is in development. Developer miHoYo recently announced a slew of content for the upcoming Version 2.1. This included a fishing system. It will also mark the reappearance of Fatui members Signora and Scaramouche.