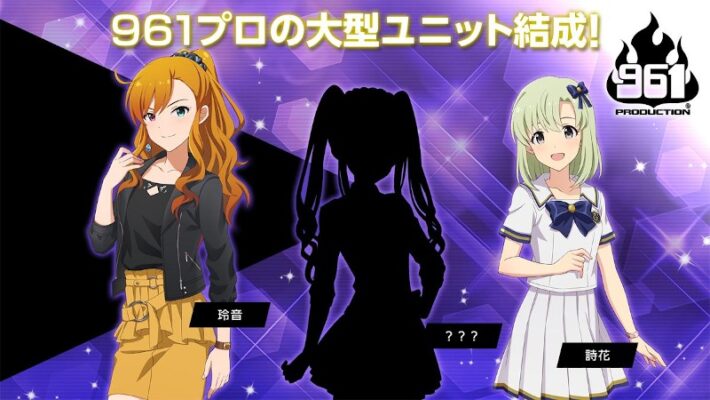 Bandai Namco revealed more details about The Idolmaster: Starlit Season. The franchise’s rivaling 961 Production will launch a new idol unit to compete against the player’s Project Luminous group. The rival unit will consist of Leon, Shika, and an unknown new idol. [Thanks, 4Gamer!]

Recent console games in The Idolmaster franchise have featured rival idols that compete against the player’s idol units in music festivals. Leon first appeared in the 2014 PS3 title One For All, while Shika debuted in the 2017 PS4 title Stella Stage. Although both idols have been known to belong to 961 Production, Starlit Season will have them appear in the same unit for the first time.

The third idol in 961 Production’s unit will be a new character, similar to how Kohaku Okuzora newly appeared in the Project Luminous group. The new character will be unveiled at a later date.

Starlit Season is the upcoming newest console game in The Idolmaster series, where players act as Japanese idol producers tasked to manage training and performance schedules for fledgling idols. While prior console games only featured the 765 Production All-Stars unit, Starlit Season will include additional idols from the mobile games Cinderella Girls, Million Live, and Shiny Colors.

The Idolmaster: Starlit Season will be available for thePlayStation 4 and PC in Japan and Asia on October 14, 2021. A demo of the game will appear on the Japanese PlayStation Store on August 5, 2021.