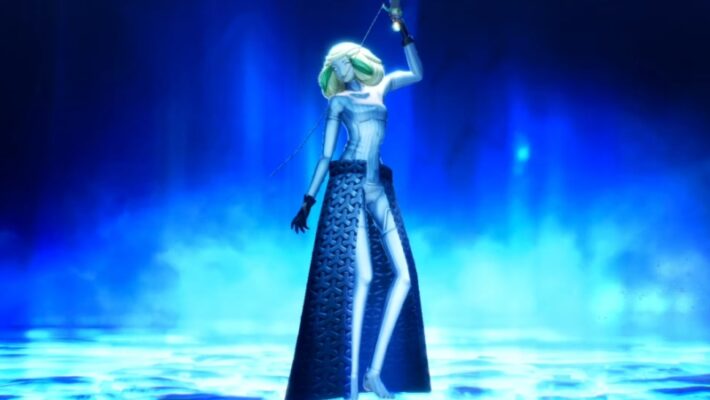 The sisters are reunited: The third of the Three Fates, Clotho, has arrived in SMT V. She joins her two siblings Lachesis and Atropos to complete the Moirae, a trio of mythological figures that has been a fixture in Shin Megami Tensei since 2003’s Shin Megami Tensei III: Nocturne.

As with other daily demon trailers, the clip was uploaded to the official Atlus YouTube channel in Japan.

Like the others of the Moriae, Clotho originates from Greek myth, a daughter of the gods Erebus and Nyx. Clotho is the youngest of the three sisters, but when it comes to the manipulation of human destinies, she comes first. She spins the thread of human life, which Lachesis then measures out, and Atropos then cuts. Beyond her activities as part of the Three Fates, Clotho was involved in many myths of ancient Greece. She raised Pelops from the dead after his father Tantalus killed and prepared him as a sacrificial meal for the gods. Alongside Hermes, Clotho and her sisters helped create the Greek alphabet and bring it to humankind.

As in previous franchise titles, Clotho hails from the Femme race in SMT V. The trailer doesn’t show her list of abilities, but does demonstrate her using the skill Makarakarn to raise an anti-magic reflective barrier around the party. She also uses Mediarama to heal the group, and Lullaby to send an enemy to sleep. Some dialogue with Clotho is also shown, where she regards the player character as “A child, lost in love,” and promises to “teach [them] the right way” in exchange for their devotion as her servant.

Clotho is the 94th SMT V daily demon entry. Below are the 20 most recent releases so far.