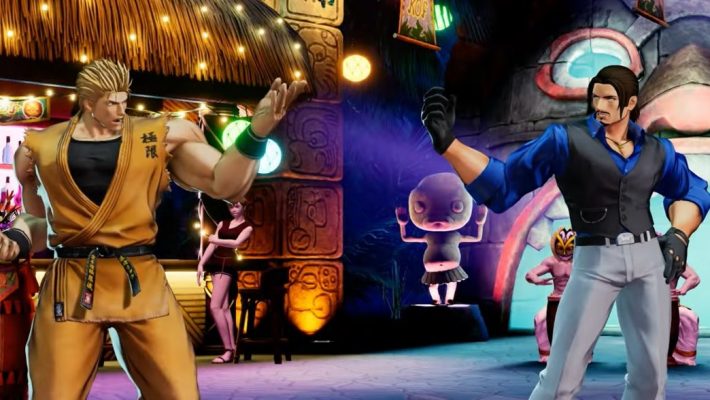 Two more Art of Fighting characters are coming to The King of Fighters XV. Yuri Sakazaki’s brother Ryo will be in KOF XV, as will Robert Garcia. The two of them will appear together on Team Art of Fighting with the previously revealed King.

This means that the 16th and 17th character trailers are combined into one. However, it’s still only just under two minutes long, just like the videos focusing on one person. First, we see “The Invincible Dragon” Ryo’s introduction. Then it shows his opponent, “The Raging Tiger” Robert. We then get to see a bit of both characters’ moveset as they attempt to beat each other up at the Pao Pao Cafe stage. At the very end of the video is the confirmation that they’re teaming up with King. (The two appeared on a team with her in past games as well.)

The roster is really starting to fill out, especially as we learn about teams. For reference, so far SNK announced four other teams. First was Team Hero with Benimaru, Meitenkun, and Shun’ei. Then, there was Team Three Sacred Treasures, which pairs up Chizuru, Iori, and Kyo. After that, we learned Andy, Joe, and Terry would appear as Team Fatal Fury. After Chris’ reveal, SNK confirmed he’d appear with Shermie and Yashiro as Team Orochi.

Here are all of the past KOF XV character trailers revealed so far, in case you’d like to look back after watching Ryo and Robert fight.

The King of Fighters XV will launch in 2021. SNK hasn’t narrowed down a release date or revealed its platforms yet.